For buyers purchasing goods and materials from China, an unwelcome trend over the summer has been gradual gains in the Renminbi’s (RMB) strength.

RMB gains against the dollar

The Chinese RMB has strengthened against the dollar in the region of 2.5% in the last four weeks, as the below graph from XE currency exchange firm shows. The RMB moved from 6.951 to 6.770 per dollar — equating to a stronger RMB, or weaker dollar. 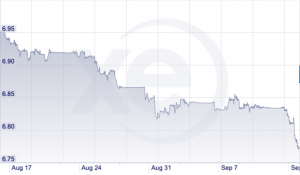 The RMB is forecast to strengthen further, according to JPMorgan (as reported by the Financial Times).

Ken Cheung, a strategist at Mizuho Bank, is quoted as saying the onshore RMB could rise further, supported by stronger consumer spending and a tightening labor market.

To what extent, though, is this RMB surge a result of a markedly improving economy? How much is down to just a weakening dollar — a phenomenon we have explored previously on MetalMiner — as a major driver of commodity price recovery over the summer?

RMB strength vs. the Euro

A fair measure would be how the RMB has fared against other currencies.

Over a similar time period, the RMB has also strengthened against the Euro. With respect to that comparison, the RMB is up 2.8% rise, as the graph below from the same source illustrates: 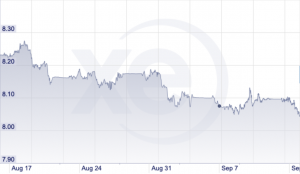 How much more can the RMB gain?

In itself, the aforementioned is scant comfort to U.S. buyers seeing upward pressure on prices out of China.

However, it does suggest there may be a limit on how much further the currency has to go.

The Central Bank of China, while relatively sanguine to date, will likely not want to see a prolonged and ongoing strengthening in the currency. Many export industries are still struggling in a pandemic-disrupted global market.

Currently, the RMB is around the middle of its two-year range against the U.S. dollar. The RMB hit a peak of over 7.10 twice, at the beginning of September 2019 last year and the end of May 2020. Yet, the RMB also tested sub-6.70 in late April when China started to recover from the first wave of the pandemic while Europe and the U.S. were in the depths of lockdowns.

It is not inconceivable we could test those levels again if the disparity between economic recovery between East and West increases.

For now, nearly all economies are showing signs of decent recovery. Current strength in China could be a case of first in first out, with China simply ahead of the curve on its recovery path.