Europe goes back into lockdowns, growth forecast to collapse — again

Investors finally woke up to the resurgence of COVID infections in Europe and the series of national lockdowns. British Prime Minister Boris Johnson announced a one-month lockdown over the weekend. The U.K.’s lockdown adds to those already in place in the other parts of the U.K. and to those of Belgium, France, Spain, and elsewhere across the E.U. 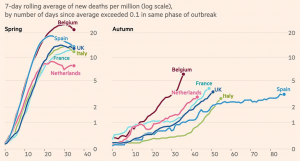 Governments seem surprised by the speed with which this second wave has spread through the populations. This comes despite medical experts predicting as far back as the spring that this is exactly what would happen as the colder weather drove people indoors in the fall.

According to the Financial Times, COVID-19 cases have risen across Europe but prevalence is still much higher in some countries than others.

Public support is more limited than in the spring.

Objections to a perceived denial of individual rights has in part fueled demonstrations in Barcelona, Paris and Berlin. However, the demonstrations also stem from worries about the economic impact.

A separate Financial Times article reports economist predictions of a 2.3% contraction in the fourth quarter across the E.U. That would mark a sharp reversal from the 12.7% growth in the third quarter – albeit that was from a severely depressed first half, when Eurozone output fell by 15%.

The new lockdown measures are not as severe as in the first half. We have all learned a lot about the transmission of infections and it is believed, with adequate precautions, schools, universities and manufacturing can remain open.

But it is the impact on the services sector — retail, hospitality, and travel — that will have the most severe impact on economies that are highly weighted towards services rather than manufacturing or construction.

While most lockdowns will likely be limited, the U.K.’s is until the beginning of December. Much will depend on how effective they are as to when they can be relaxed. As a result, growth in Q1 next year is also predicted to be depressed, with a barely positive 0.7% expected. That would leave European economies still well below pre-pandemic levels into late next year.

Not surprisingly, stock markets have reacted the most negatively to the news, with oil close behind.

Brent crude last week took its steepest slide since April on mounting concerns over the hit on demand for fuels.

The Financial Times estimated France and Germany, which together consume about 4 million barrels per day in normal times, could cut consumption by an additional 1.7 million barrels this month. As a result, such a cut would add pressure to OPEC producers to further trim output.

Commodities, driven more by demand from China, have not reacted so significantly. The one glimmer of light is strong China Purchasing Manager Index (PMI) readings, suggesting the Chinese recovery is gathering pace.