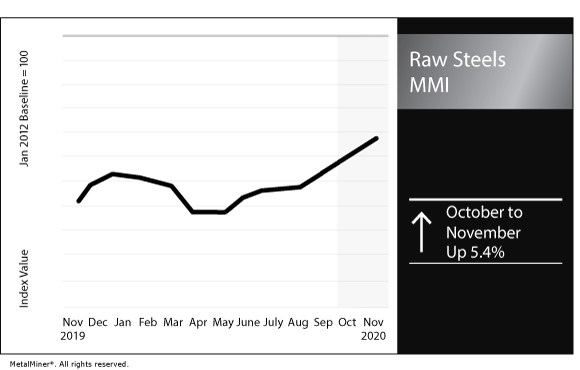 U.S. steel prices continued to increase in October for the third consecutive month.

Wire rod, however, was the only form of steel that did not increase in price this month, as it instead remained flat.

In contrast, Chinese HRC, CRC and plate prices increased around 2% in October. Meanwhile, HDG prices remained flat throughout the month. For the second month,

U.S. prices surpassed Chinese HRC, CRC and HDG prices. No price arbitrage existed for Chinese buyers, as local prices were lower than imported prices. Chinese prices had a four-month uptrend before prices flattened. On the other hand, U.S. prices started their uptrend approximately 2.5 months ago.

For the past two years, Chinese prices have led U.S. prices. Will that relationship mean U.S. prices will flatten within the next month and half?

Steel demand in the U.S. seems to be getting stronger.

As we have reported for a few months now, U.S. automotive production is on the rise.

However, commercial construction is another industry that is picking up. The Architecture Billings Index (ABI) rose from 40 in August to 47 in September. The Design Contracts Index rose by 6.3% to 48.9, which signals that at least the number of inquiries into new projects is increasing.

Similarly, Reliance Steel and Aluminum indicated demand in nonresidential construction continued to increase slowly during the third quarter due to healthy bidding activity for new projects and the restart of projects that had previously been put on hold.

Even though steel prices in China have stalled, steel production seems to remain strong.

Most of the iron ore imports are coming from Brazil and South Africa.