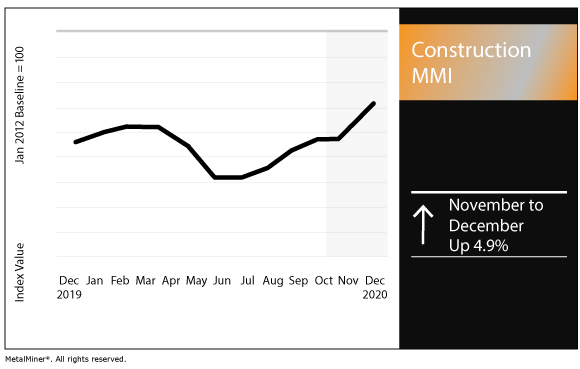 The October rate marked a 1.3% increase compared with the previous month.

In addition to rising construction spending, the Architecture Billings Index (ABI), released monthly by the American Institute of Architects, posted an October index reading of 47.5, up from 47.0 the previous month.

Any reading less than 50 indicates billings decline. Meanwhile, the design contracts index ticked up from 48.9 the previous month to 51.7 in October.

“In addition, indicators of future work strengthened, with inquiries into new projects climbing to their highest level in nearly a year, and the value of new design contracts growing for the first time since February,” the ABI report continued. “This means that not only are clients talking to firms about potential projects; they’re signing on the dotted line to start those projects. Both of these indicators are encouraging signs that business is slowly, but steadily, returning at many firms.”

Of interest to metals buyers, this month’s ABI survey asked architecture firms whether they’ve seen changes in prices or availability for construction materials.

Six of 10 respondents said they had seen some degree of higher prices and more limited availability.

Furthermore, 32% of those respondents indicated they had seen significantly higher prices or limited availability, while 28% said the changes have been modest.

Going forward, as the economy continues to recover and the nation and world remain hopeful about vaccines’ ability to begin to control the spread of the coronavirus pandemic, metals prices could continue to rise. Furthermore, there remains the significant wild card that is a potential U.S. infrastructure bill, which would serve as a massive boost for metals demand.

Pending home sales down in October

In the U.S. housing market, the National Association of Realtors reported pending home sales in October dropped 1.1% from the previous month.

However, each of the four major U.S. regions saw year-over-year gains in pending home sales transactions.

“Pending home transactions saw a small drop off from the prior month but still easily outperformed last year’s numbers for October,” said Lawrence Yun, NAR’s chief economist. “The housing market is still hot, but we may be starting to see rising home prices hurting affordability.”