Home | Exports | Brexit aftermath: U.K.-E.U. reach deal, but much is left to be decided
Market Analysis

Brexit aftermath: U.K.-E.U. reach deal, but much is left to be decided 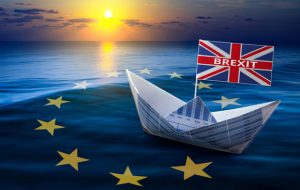 After four and a half years and unprecedented social and political discord, it has finally happened: the United Kingdom has left the European Union with the bare bones of a free trade agreement.

It took until Christmas Eve — ahead of the Dec. 31 deadline exit date for both sides to make the final compromises necessary to reach an agreement.

However, to Prime Minister Boris Johnson’s credit, after all of the lies and disinformation around the benefits of leaving the E.U., he did finally get it done. Even the normally neutral and sober Financial Times acknowledges it is but the bare bones of a deal, with much left uncovered and much still to be agreed.

The deal covers goods, exports to the E.U. of which make up just 8% of U.K. GDP. However, the deal leaves out services. According to The Guardian, services account for around 80% of the U.K.’s economic activity and about 50% of its exports by value to the E.U.

There will be a lengthy process of ongoing negotiation around how much access the City of London is allowed to E.U. business. Similarly, there will be discussions regarding what constitutes the required “equivalence” for which the E.U. is looking.

This means the previous passporting agreement allowing automatic access to the E.U. is replaced by so-called equivalence. That is, each side unilaterally permits companies from the other to conduct certain financial activities in its territory.

That’s hardly a stable position. E.U. countries like France and Germany have made no secret of their desire to challenge the U.K.’s historical dominance in financial services post-Brexit.

The U.K. is now free to set up trade deals with countries outside of the E.U.

Recent deals include significant trading partners, like Japan. In reality, however, it is little more than a rollover of the current E.U.-Japan trade dea. So far, nothing agreed will add significantly to the U.K.’s fortunes in the years ahead.

One problem the U.K. faces is the requirement to retain what is termed a “level playing field.” Meaning, regulations and support for firms are not to significantly diverge between the U.K. and E.U., which would allowing one side — the U.K. is the E.U.’s fear — to create an undue advantage over the other.

The check mechanism agreed is the E.U. can raise tariffs on U.K. goods if it perceives the U.K. has acted unfairly. However, such tariffs have to be proportional.

Expect threats of such tariffs to be an ongoing feature of the U.K.-E.U. relationship under the new free trade agreement.

Above all, the E.U. is desperate that the U.K. does not experience a significant improvement from leaving the bloc. That way, it won’t encourage other E.U. states to follow.

To this end, it has fought all along to limit the ability of the U.K. to emerge as a major competitor on its doorstep. That is why it insisted a free-trade deal with a close neighbor like the U.K. must include some coordination of economic standards. Those requirements have not appeared in similar E.U. agreements with Canada or Japan.

On the plus side, the deal does allow tariff-free trade between the U.K. and E.U. Furthermore, the deal limits, but does not eliminate, bureaucratic obstacles to free trade. Those obstacles include border controls as severe as those with countries wholly outside the European bloc.

In the U.K., there is as much relief that the parties have finally reached a deal. Furthermore, there is some sense that now business has a framework on which to move forward.

The population at large has remained fairly close to their 2016 views with a slow but gradual shift from the small majority Leave camp to a small majority Remain position over time.

According to the Wall Street Journal, a larger majority of Britons on the whole say, in hindsight, it was a mistake to leave the bloc.

The latest poll on Nov. 12 by YouGov showed 51% of people think it was the wrong decision. Meanwhile, 38% came in on the other side, marking the largest gap since 2016.

Perhaps the most significant political threat, though, is not about the rights and wrongs of exit – most seem resigned to the fact the country has now left – but rather the impact it will have on the union of England, Scotland, Wales and Northern Ireland.

Those four countries within a country will be continually reassessing the relative risks and rewards of continued cooperation in a union that ceases to benefit from membership of the E.U. As such, the U.K.’s departure from the E.U. will probably hasten the disintegration of the union over time.