The Renewables Monthly Metals Index (MMI) traded flat for this month’s reading, as cobalt prices have surged so far this year. 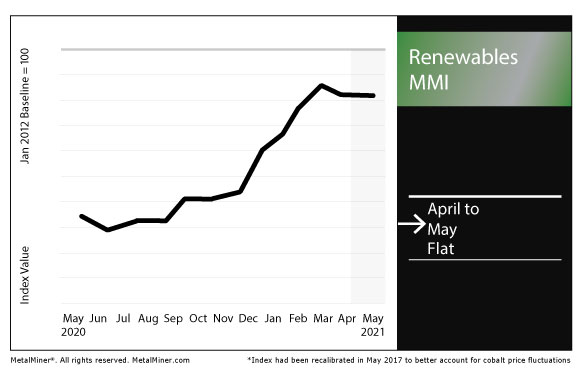 Earlier this month, MetalMiner’s Stuart Burns delved into the rise of electric vehicles. Furthermore, he also zeroed in on rising EV demand’s impact on prices, particularly for critical battery metals like cobalt.

For EV manufacturers, the challenge lies in cobalt supply, cost and ethics. A majority of the world’s cobalt is mined in the Democratic Republic of the Congo, where the documented use of child labor in artisanal mining operations poses significant ethical problems.

“The Financial Times reports that cobalt prices jumped 40% in Q1, laying the blame solely on battery demand,” Burns wrote. “Of all the component metals in EV batteries, cobalt faces the most constrained supply base. A very significant percentage of that cobalt still comes from the Democratic Republic of the Congo.

“Some buyers, such as China’s CATL, have no reservations about investing in countries that face allegations of child labor. The firm recently invested $138 million in an undeveloped copper and cobalt resource in the country.

“Others are voting with their wallets. Those companies are restricting contracts to suppliers in Russia, Australia, Philippines and even, in the case of BMW, from Morocco.”

Demand for cobalt is likely to continue to surge given its central role in lithium-ion batteries.

In its recent report, “The Role of Critical Minerals in Clean Energy Transition,” the International Energy Agency forecast a monumental surge in demand for cobalt and other metals over the next couple of decades.

“In a scenario that meets the Paris Agreement goals, clean energy technologies’ share of total demand rises significantly over the next two decades to over 40% for copper and rare earth elements, 60- 70% for nickel and cobalt, and almost 90% for lithium,” the report stated. “EVs and battery storage have already displaced consumer electronics to become the largest consumer of lithium and are set to take over from stainless steel as the largest end user of nickel by 2040.”

While demand growth is subject to a variety of political and technological uncertainties, the IEA forecast cobalt demand by 2040 could rise by anywhere between six to 30 times compared to today’s levels.

In the short term, cobalt supply likely won’t be represent a crisis. However, that will almost certainly change under a longer-term view.

“Some minerals such as mined lithium and cobalt are expected to be in surplus in the near term, while lithium chemical products, battery-grade nickel and key rare earth elements (e.g. neodymium and dysprosium) might face tight supply in the years ahead,” the IEA added. “However, looking further ahead in a scenario consistent with climate goals, expected supply from existing mines and projects under construction is estimated to meet only half of projected lithium and cobalt requirements and 80% of copper needs by 2030.”

Last month, the US and India launched the US-India Climate and Clean Energy Agenda 2030.

In a release, the State Department hailed the “high-level partnership” and emphasized cooperation toward Paris climate agreement goals.

Both countries will seek to ramp up renewable energy capacity in the coming decade.

“Both the United States and India have set ambitious 2030 targets for climate action and clean energy,” the State Department release said. “In its new nationally determined contribution, the United States has set an economy-wide target of reducing its net greenhouse gas emissions by 50–52 percent below 2005 levels in 2030. As part of its climate mitigation efforts, India has set a target of installing 450 GW of renewable energy by 2030.”

India has been among the world leaders in solar power capacity, recently becoming the third-largest producer of solar power. Meanwhile, for the US, the collaboration builds on President Joe Biden’s climate agenda. In February, the president signed an executive order outlining his administration’s climate goals. Among the proposals, Biden called for a federal vehicle fleet consisting of zero-emissions vehicles.

The US-India partnership will seek to speed up clean energy deployment, the State Department said. In addition, it will aim to “scale innovative clean technologies needed to decarbonize sectors” and “build capacity to measure, manage, and adapt to the risks of climate-related impacts.” 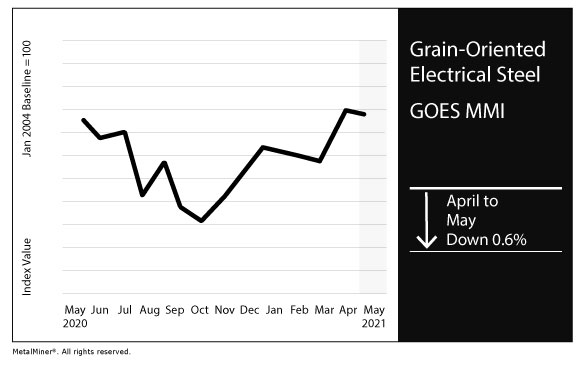