The Raw Steels Monthly Metals Index (MMI) picked up 9.0% for this month’s reading, as steel prices continued ascending this past month. 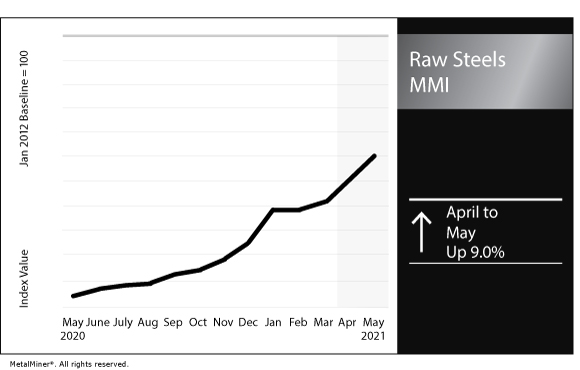 US steel prices continue to rise

For buyers waiting to see a peak in steel prices: keep waiting.

At least for now, steel prices continue to rise, posting double-digit month-over-month price gains. Price rises took somewhat of a pause from late March into mid-April, but it proved temporary.

That is reflected in a skyrocketing iron ore price, too, MetalMiner’s Stuart Burns explained earlier this week.

“Iron ore prices’ relentless rise this year went into overdrive Monday, hitting a +10% limit up and prompting the Dalian Commodity Exchange to raise trading limits and margin requirements in an effort to calm speculation,” he wrote.

“Separately, the Shanghai Futures Exchange said it would set fees for closing positions on its steel rebar and hot-rolled steel coil futures contracts at 0.01% of the total transaction value. Those transactions had previously been free.”

In turn, Chinese steel prices have also surged, with some forms jumped by double-digit percentages this week alone.

In 2018, then-President Donald Trump imposed tariffs on imported steel and aluminum of 25% and 10%, respectively. Trump deployed the infrequently used Section 232 of the Trade Expansion Act of 1962 to impose the duties.

According to the report, Tai said the US needs “2021 tools” rather than “1962 tools” to tackle today’s challenges in trade.

Steelmaker Nucor said it plans to upgrade its engineered bar mill in Norfolk, Nebraska, with a $58 million investment. It plans to complete the upgrades by Q4 2022.

The upgrades to the engineered bar mill will help it better serve the automotive market, Nucor said.

Upgrades to the mill will include a new reheat furnace, new intermediate mill, and coil inspection and trimming station.

As mentioned, April proved to be a dynamic month for steel prices, in both the US and China.