It is no secret that, on the whole, Europe was backing a Joe Biden win in the 2020 US presidential election.

A few eastern European countries, like Hungary and Poland, rather warmed to former President Donald Trump’s narratives. However, on the whole, socialist Europe saw more of a kindred spirit in Biden. In that vein, it expected his election would see a thawing of US-EU trade relations.

With volatile steel markets, knowing which strategy to execute and when can make all the difference. See how MetalMiner looks at different market scenarios. 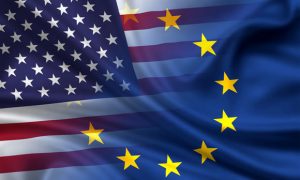 To some extent, Biden has not disappointed.

A rapid return to the 2016 Paris climate change agreement and last week’s removal of sanctions on the company behind the all-but-completed NordStream 2 gas pipeline from Russia were expected and welcomed.

The first is as much commercial as political. We’ve covered it before: the decades-long dispute between Boeing and Airbus over claims and counter-claims of unfair state support and subsidy rumbles on.

In March, the EU and US agreed to suspend all retaliatory tariffs on EU and US exports imposed in the Airbus and Boeing disputes for a four-month period. The pause allows both sides to focus on resolving the dispute.

Arguably, Trump’s hard-nosed approach is what ultimately brought both sides to the table. Biden’s approach may find a solution. Neither side has gained from the sanctions since 2018.

As such, a solution is to everyone’s benefit.

Europe this week postponed the escalation of retaliatory tariffs — said by the Financial Times to be of at least 50% — on US goods, including bourbon and Harley-Davidsons (really, couldn’t Brussels have picked something we don’t want to slap tariffs on?). The move came as an olive branch to Washington to find a solution to a much thornier issue impacting US-EU trade relations: Section 232 steel tariffs.

Ignoring the argument that to call the US’s closest ally a threat to national security is something of an insult, the intention of the Section 232 tariffs on steel and aluminum was to stop the long-term decline of the US steel industry by protecting domestic producers from low-cost imports.

Those low-cost imports in some, but not all, cases came from countries with lower environmental regulations and worker costs, in addition to benefiting from state support.

The intention was honorable. However, the strategy shifted a substantial cost to steel consumers, who employ far more workers than the steel industry and represent a far larger proportion of the economy.

However, the argument holds that steel production is a strategic critical resource. Countries that allow their steel industries to dwindle find themselves in the invidious position of relying on others for sometimes critical supplies. For instance, the UK that relies on French steel for the construction of Britain’s nuclear submarines. That may be viable while the UK and France are friends. However, France’s threat this month to cut off electricity supplies to a British island shows you can’t always rely on your friends.

US businesses call for Biden to rescind Section 232 tariffs

According to the Financial Times last week, about 300 smaller US businesses wrote to Biden to demand that he drop the 25% import duties. They argued that for some products, US businesses are paying 40% more for similar steel compared to European counterparts. Furthermore, delivery times are stretching from six weeks to 20 weeks.

The reason for that is not exactly due to the 25% import duties, of course. The steel industry is caught in a global supply chain restocking frenzy. The tariffs make the US market tighter than it would otherwise be. Some are suggesting Biden’s infrastructure investment program could make the problem worse or extend the tight market further into the future (or both).

Europe remains hopeful the Biden administration will relax the 25% tariffs on European steel.

But the Financial Times suggests their optimism may be misplaced.

While arguments rage back and forth about the impact of the tariffs in the US, they remain a highly charged political issue. The tariffs have achieved one of the primary objectives the Trump administration had when rolling them out in 2018: lifting US steel mills’ capacity utilization rates.

The latest solution seems to be a much closer cooperation with Europe to tackle Chinese steel overcapacity. That is a topic dear to the European steel industry’s heart. A solution could involve tightening rules of origin and setting import quotas in both regions.

But an early removal of the tariff?

There, the EU may be disappointed.

In the eyes of its US backers, the tariffs are a bulwark protecting a politically important industry. Consumers have largely learned to cope with them.