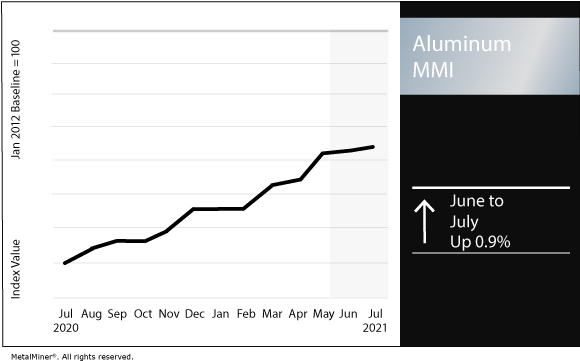 The economy minister of Russia, Maxim Reshetnikov, announced that the government was contemplating adding an export duty of at least 15% for steel, nickel, aluminum and copper, effective Aug. 1 through the end of the year.
The measure comes as an effort to protect its defense and construction industries as metal prices continue to rise globally.
However, these tariffs could have a particularly negative global implication for the aluminum market. Rusal controls about 10% of the global aluminum sector.
Moreover, Russia is the second-largest exporter of primary aluminum to the U.S. As such, the U.S. domestic aluminum market would feel an even bigger squeeze, causing further increases in the Midwest premium.

According to Bloomberg, buyers in Japan agreed to pay a premium of $185 per ton above LME prices for the coming quarter, the highest in six years.
This is a sign of a tight aluminum market. As the World Bureau of Metal Statistics reported this month, the aluminum market from January to April 2021 posted a deficit of 588,000 tons.
The deficit is due to a rapid turnaround in the economy. Demand slowed as travel declined early on during the pandemic but has since snapped back strongly.
The price rally has triggered several countries to take measures to help put a cap on price increases. Russia appears poised to implement export tax changes. Furthermore, China plans to release strategic reserves of the metal for the rest of the year.

Norwegian industrial company Hydro Aluminum Metal signed a letter of intent to purchase a property in Cassopolis, Michigan, with the objective of building an aluminum recycling plant. The plant will produce aluminum extrusion ingot for use in critical automotive applications, in addition to other transportation and building systems.
The plant is estimated to cost a total of $120 million with a 120,000-metric ton capacity. The final product will be Hydro’s signature “Hydro CIRCAL® extrusion ingots, which contain at least 75% post-consumer scrap certified by third party auditors DNV GL.” The ingots have a CO2 footprint of 2.3 kg CO2e/kg aluminum, Hydro said.