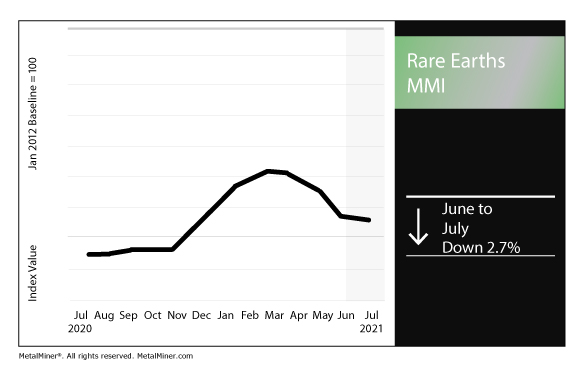 Energy Fuels Inc. and Neo Performance Materials Inc. announced that they have executed the first shipment of mixed rare earth carbonate from a mill in Utah to a separation facility in Estonia.
On July 7, Energy Fuels announced the first shipment, containing approximately 20 metric tons of the mixed rare earth carbonate, from the White Mesa Mill in Utah. The material was en route to Neo Performance Materials’ rare earths separation facility.
The announcement represents the start of a fledgling U.S.-E.U. rare earths supply chain. Both the U.S. and the E.U. have long sought to mitigate dependence on China, which dominates an overwhelming majority of rare earths mining and refining.
The shipment marked the first of an expected 15 containers of carbonate to be sent to the Estonia facility, Energy Fuels said in the July 7 announcement.
“Additional shipments of RE Carbonate are expected as Energy Fuels continues to process natural monazite sand ore mined in Georgia (U.S.) by Chemours for both the rare earth elements and naturally occurring uranium that it contains,” Energy Fuels said.
Monazite is produced as a byproduct of existing heavy mineral sands mining, Energy Fuels said. The material also contains naturally occurring uranium that Energy Fuels recovers for use in the generation of carbon-free nuclear energy, the company added.
Furthermore, the companies announced the signing of a contract for a definitive supply agreement.
“Under the Agreement, Colorado-based Energy Fuels will ship all or a portion of its RE Carbonate to Neo’s Silmet rare earth separations facility,” Energy Fuels added. “Neo will then process Energy Fuels’ RE Carbonate into separated rare earth materials for use in rare earth permanent magnets and other rare earth-based advanced materials.”

According to official data from the General Administration of Customs, China exported 4,171 tons of rare earths in May 2021.
The May totaled marked an 11.6% increase from 3,737 tons in April.
Through the first five months of the year, China exported 19,833 tons. The total marked an increase of 8.7% from the first five months of 2020.
By value, exports during the five-month period reached U.S. $245.4 million, up 57.3% year over year.

Last month, the Biden administration announced the establishment of a new Supply Chain Task Force. The new body will aim to “address near-term supply chain challenges to the economic recovery.”
The secretaries of commerce, transportation and agriculture will lead the new task force. Furthermore, the task force will focus on areas in which there has been a “mismatch” between supply and demand, with the White House specifically citing homebuilding and construction, semiconductors, transportation, and agriculture and food.
Earlier this year, President Joe Biden signed an executive order titled America’s Supply Chains. The order called for 100-day reviews of critical U.S. supply chains, to be carried out by various agency heads.
In its announcement, the White House called for the creation of sustainability standards for a host of critical metals.
“The government, working with private sector and non-governmental stakeholders, should encourage the development and adoption of comprehensive sustainability standards for essential minerals, such as lithium, cobalt, nickel, copper, rare earth elements, and other materials,” the White House said.