The Copper Monthly Metals Index (MMI) increased by 3.5% for July’s reading, as the LME copper price increased by approximately the same. 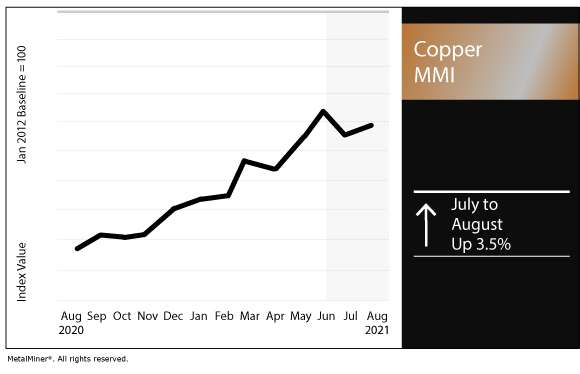 LME trading volumes, along with prices, traded sideways for the first three weeks of the month and picked up pace toward the end of the month, signaling an uptrend. Prices reached $9,856/mt before closing the month. Prices and trading volumes have dropped since.

SHFE prices behaved similarly to LME prices, trading sideways the first three weeks of the month and climbing the last week. The SHFE price closed the month at CNY 71,180/mt. Just like the LME, prices dropped the first week of August. Trading volumes on the SHFE were unusually lower than previous months. Even when prices jumped toward the end of the month, volumes picked up.

The light movement in the SHFE could be due to a slowdown in the Chinese economy. This month, China’s Caixin Index fell by 6.4% compared to June. Consumer spending slowed due to higher prices. While new orders declined for the first time since May 2020.

All eyes on Chile

On July 31, after negotiating for two months, members of the union at BHP Escondida mine, the largest copper mine in the world, voted to reject the final labor contract offer and approved a strike. However, before the union can start a legal strike, BHP requested a 5- to 10-day mediation period between them and the union, facilitated by the Chilean government. The 10-day period expires Aug. 13.

Lately, copper prices appear heavily influenced by disruptions and potential supply constraints. Days ahead of the decision by the union to decline the final offer, copper prices spiked. If the strike goes through, in the current market environment — with tight global supply and high demand — prices will jump.

Additionally, Escondida reported that its production declined for the 11th consecutive month.

However, copper prices found some relief as Codelco, the largest copper mining company, released Q2 company financial and production information. The company’s production for the first half of the year was 7% up year-over-year, exceeding their outlook.

Another reason why the copper price did not pick up throughout July is the volatile U.S. dollar and the forces behind that trend.

Last month, MetalMiner reported that the US Federal Reserve intended to reverse quantitative easing policies, leading to increases in interest rates and a stronger dollar. Despite that initial report, during the last week of July, the Fed had a two-day meeting during which it decided that the U.S. economy was on track to economic recovery but that monetary stimulus was still necessary and rate increases were distant. This would make dollar-priced metals like copper cheaper to holders of other currencies, spiking demand.