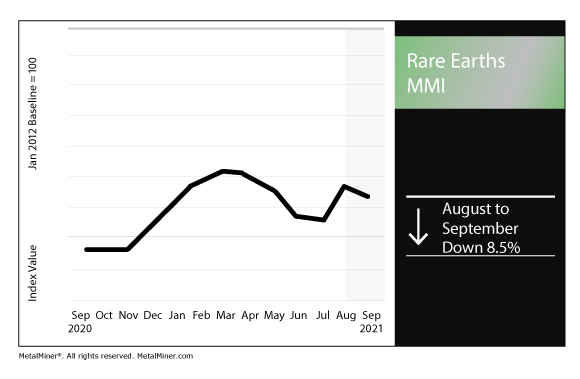 Lynas said it plans to defend the appeal. Malaysian authorities granted the operation a three-year license renewal in February 2020.

In other Lynas news, the firm reported its financial results for the fiscal year ending June 30, 2021.

Lynas touted several measures executed as part of its Lynas 2025 growth plan. Among them, the firm established two new exploration drill holes below the Mount Weld mine’s current pit floor. The exploratory efforts revealed “significant and continuous intersections” of rare earths minerals below the current life of mine, the miner said.

Meanwhile, in news relevant to the U.S. audience, Lynas continued planning for its rare earths separation facility in the U.S.

“In line with Lynas 2025 growth plans for downstream processing closer to our customers, planning continues for the proposed U.S. Rare Earths Separation Facility,” the company said. “Lynas signed contracts for two separate funding grants from the U.S. Government during the year, one for Phase 1 work for a U.S. based Heavy Rare Earths (HRE) separation facility and another for the development of a commercial Light Rare Earths separation plant in the United States.”

In addition, exports through the first seven months of the year totaled 27,781 tons. The seven-month total jumped 22.2% year over year. Furthermore, in terms of U.S. dollar value, the value of the 2021 exports jumped by 72.6% year over year.

The Chinese yttrium price held flat at $33.28 per kilogram. Meanwhile, the terbium oxide price fell 8.0% month over month to $1,200 per kilogram.