US, EU deal on Section 232 tariffs calls for sustainability cooperation

As we predicted last month, the U.S. and E.U. have used the recent G20 summit in Rome to announce an end to hostilities over the steel and aluminum Section 232 tariffs imposed by the previous Trump administration and perpetuated by President Joe Biden.

“We have agreed with the US to pause our steel and aluminium trade dispute and launch cooperation on a Global Arrangement on Sustainable Steel and Aluminium,” Valdis Dombrovskis, EU trade commissioner, tweeted Saturday. 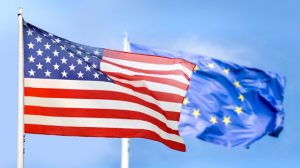 The intriguing issue is not the resolution of the tariffs, to be replaced by a quota system. The second part of the sentence — “cooperating on a global arrangement on sustainable steel and aluminum” — is the interesting part.

The negotiations have come up with a “kill two birds with one stone” solution to a dispute that was doing neither side any good. Indeed, the retaliatory measures promised to cause even more harm from next month if the sides did not reach a solution.

Jake Sullivan, Biden’s national security advisor, told reporters the deal removed “one of the largest bilateral irritants in the US-EU relationship” according to the Financial Times.

The tariffs will be replaced by a quota system, probably adjusted annually. The exact details of the arrangement are still to be worked out.

But as the U.S. only bought 3.2 million tons of steel from Europe pre-pandemic as a percentage of the total market, European supply has always been a fraction.

Total U.S. steel consumption amounted to about 81 million tons last year. European supplies would be about 4% if the quota comes in at pre-pandemic levels.

The interesting part is the agreement to develop a carbon-based arrangement to cover steel and aluminum trade between the two blocs. Such an arrangement could become a template for other developed markets, like Japan. It could also be applied to other heavy polluters, like India and Russia.

The arrangement aims to combat “dirty” production and overcapacity in the industry, Reuters reports. Meanwhile, the future E.U.-U.S. arrangement will be a challenge for China, which produces more than half of the world’s steel and which the E.U. and U.S. accuse of creating overcapacity that is threatening the survival of their own steel industries.

By cloaking the agreement in the mantle of an environmental action, both sides are looking to add pressure to China’s heavily coal-based steel and aluminum industries. As such, going forward they could use the environment as justification for keeping out Chinese steel and aluminum. That marks a distinct shift from national security and survival of the domestic steel industry. Furthermore, it’s far more likely to win support in the wider community where “the environment” is flavor of the day.

Although that sounds cynical, it is not intended to be. The policy has much to commend it from an environmental point of view.

China is the world’s biggest polluter. The country’s China’s steel and aluminium industries create more carbon emissions than the rest of the world put together. Despite massive world-leading investment in renewable power generation, China is still building coal-fired power stations. It clearly has no intention of decommissioning those it has in operation.

India is in much the same position. Meanwhile, although Russia’s Rusal produces some of the world’s lowest-carbon aluminum, its steel industry is not so virtuous. Even relatively high-tech, new steel EAF plants, of which China has a small but growing sub-segment, and many new aluminum smelters still rely largely on power generation from coal.

The steel sector alone is said to contribute between 10% and 20% of total carbon emissions in the country. If the new agreement keeps out subsidized steel, deters further investment in unnecessary further production capacity and adds an additional incentive to reduce dependence on coal-fired power production, then maybe the U.S.-E.U. agreement will succeed in hitting two targets at the same time.