The Aluminum Monthly Metals Index (MMI) fell for the first time in nine months, dropping by 1.5%. 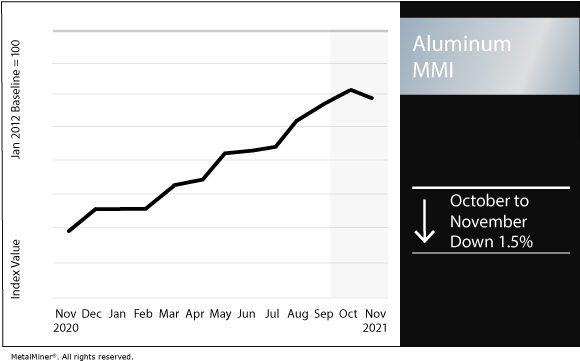 After prices hit the record peak in late October, aluminum started to face some speed bumps when the price attempted to continue to trade upward.

Since Beijing’s intervention into the coal market, LME aluminum prices began to retrace back to mid-August prices. This follows an impressive rally that extended more than a year and saw aluminum outperform nearly all base metals (with the exception of tin). 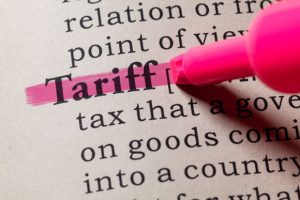 A much-anticipated agreement was reached regarding the Section 232 tariffs between the U.S. and the European Union.

Former President Donald Trump imposed the tariffs in 2018, citing national security concerns under Section 232 of the Trade Expansion Act of 1962. The import duties came in at 25% for steel and 10% for aluminum. In 2020, the Trump administration went on to add tariffs on certain derivatives of aluminum and steel.

Under the new resolution announced in late October, the existing tariffs will be replaced with a tariff-rate quota (TRQ) effective Jan. 1, 2022.

For aluminum, the TRQ will apply to historically-based volumes of E.U. aluminum. Excess volumes that enter the U.S. market will still be subject to a duty of 10% (unless they are subject to an exclusion).

The deal, which aims to improve trade and diplomatic relations, will narrowly avert a doubling of retaliatory tariffs from the E.U. on a multitude of U.S. goods. Those duties would have gone into effect Dec. 1.

The power crisis that has gripped China in recent months came to a head in October and caused metal prices to surge to record heights.

The origins of the current crisis could be seen as early as May, with reports of factories using diesel generators to mitigate rising energy prices and coal shortages, according to Forbes.

On Oct. 19, however, the National Development and Reform Commission (NDRC), China’s state planner, announced it would consider an intervention to curb rising coal prices. Chinese thermal coal futures dropped overnight and aluminum prices, in turn, plummeted. While warnings over coal price speculation seem to have effectively dragged down prices, China seeks to further increase coal supply, including increasing coal production to leaning on imports to meet the shortfall, CNBC reported.

Amid China’s power crisis, concerns mounted over magnesium shortages, an industry hard hit by production curbs. China, which has a near monopoly on the industry, produces almost 90% of global magnesium. Furthermore, China accounts for roughly 95% of the E.U.’s supply.

The European Automobile Manufacturers’ Association warned in late October that “Europe is expected to run out of magnesium stocks by the end of November.”

In the U.S., similar messages of caution were issued. The leading producer of aluminum billet in the U.S., Matalco Inc., noted in an Oct. 13 letter, “in the last several weeks, magnesium availability has dried up and we have not been able to purchase our required Mg units for all of 2022,” mining.com reported.

Output began to return at the start of October, however. Producers in Shaanxi, which accounts for beyond 60% of China’s magnesium production, are now operating at between 70-80% of capacity. Prices for Chinese magnesium have also subsequently retraced after having ascended to CNY 65,000-70,000/t on Sept. 23.