The Construction Monthly Metals Index (MMI) rose by 4.0% for this month’s reading. 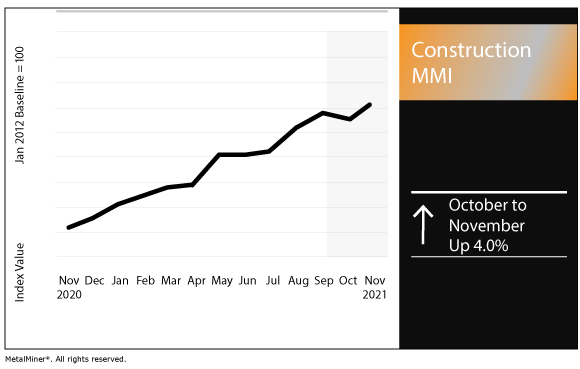 The September rate marked a decline of 0.5% from August. Meanwhile, the rate increased 7.8% from September 2020.

The Architecture Billings Index (ABI), an indicator of nonresidential construction activity, released monthly by the American Institute of Architects, reached a value of 56.6 for September.

“The ABI scores over the last eight months continue to be among the highest ever seen in the immediate post-recession periods that have been captured throughout the index’s history, underscoring just how strong the bounce back has been this year following the abrupt downturn in 2020,” the ABI report states. “Firms continue to report plenty of work in the pipeline as well, with inquiries into new projects and the value of new design contracts remaining strong.”

Architecture firm backlogs are averaging 6.6 months, the report added, a new high since the AIA began reporting the data on a quarterly basis since late 2010.

Meanwhile, the construction sector added 44,000 jobs in October following the addition of 30,000 jobs in September.

Employment in nonresidential specialty trade contractors rose by 19,000 and by 12,000 in heavy and civil engineering construction.

However, construction employment is 150,000 below its February 2020 level.

Infrastructure bill a boost for construction

Last Friday, the House of Representatives voted to pass the Infrastructure Invest and Jobs Act, which includes $550 billion in infrastructure investments.

Given the scope and scale of the projects, the bill will likely prove to be a boon for the construction sector.

The Associated General Contractor of America touted the bill on the heels of its passage.

“Because of today’s vote, state and local officials will be able to invest in a more efficient supply chain network,” said Stephen E. Sandherr, CEO of the Associated General Contractors of America. “They will also be able to improve roads and bridges to make them safer and more reliable. Metro areas will be able to better maintain and expand transit systems. And water authorities will be able to further safeguard the quality of local drinking water, among other improvements funded by this bill. The measure also provides needed investments to make infrastructure more resilient to extreme weather events.”

From bridges to electrical grid improvements to lead water line replacements, the infrastructure bill will serve as a boost for metals demand. For steel, specifically, the American Iron and Steel Institute estimated steel demand will increase by up to 5 million tons for every $100 billion in investment.

The September rate fell 1.6% from the previous month.

Single-family housing starts reached a rate of 1,080,000, virtually unchanged from the previous month.

For prospective buyers, mortgage rates fell last week, breaking up a steady rise since early August when the 30-year fixed rate reached 2.77%, according to FreddieMac data. The weekly average as of Nov. 4 reached 3.09%, down from 3.14% the previous week.