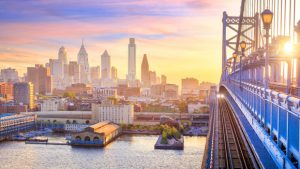 In a ceremony Monday, President Joe Biden signed the infrastructure bill most recently passed by the House of Representatives on Nov. 5.

“The bipartisan law will modernize our ports, our airports, our freight rail to make it easier for companies to get goods to market; reduce supply chain bottlenecks, as we’re experiencing now; and lower cost for you and your family.”

Import prices rose by 1.2% in October, the Bureau of Labor Statistics reported today.

The gain follows a 0.4% jump in September.

Fuel prices jumped 8.6% in October after gaining by 3.9% in September.

Meanwhile, U.S. export prices rose by 1.5% in October after gaining by 0.4% in September.

U.S. manufacturers’ and trade inventories reached an estimated $2,101.8 billion at the end of September, up 0.7% from the previous month, the Census Bureau reported.

Meanwhile, inventories increased by 7.5% from September 2020.