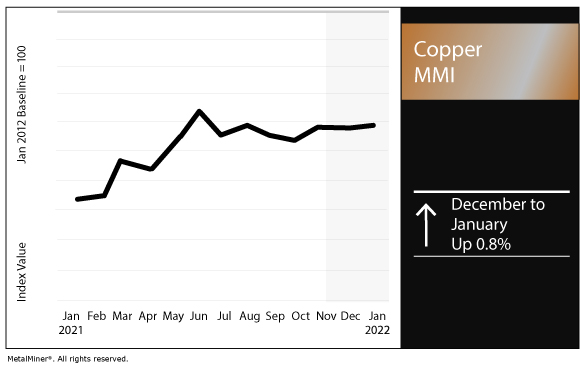 Copper prices continue to trade sideways within a big time frame, a resistance and support channel.

While prices have consolidated within the channel, there are certain points of interest marked as key levels that would indicate a macro bullish continuation or macro reversal to the downside.

As such, no significant direction in price is clear. More bullish actions need to occur to confirm an  upside.

All the metals intelligence, including copper, you need in one user-friendly platform with unlimited usage. Request a MetalMiner Insights platform demo.

Market sentiment continues to be swayed by the Federal Reserve.

After inflation reached 6.8% in November, the fastest pace since 1982, the Fed announced after its mid-December meeting it would double the pace of its tapering of quantitative easing measures put in place at the dawn of the pandemic. Beginning in January, the Fed scaled back bond purchases to $60 billion each month. Additionally, officials projected at least three quarter-percentage point rate hikes throughout 2022.

Prices recovered from the dip but faltered once again upon the release of the Federal Reserve’s meeting minutes. Amid persistent, rising inflation, a stronger economic outlook and “tighter” labor market, members suggested “it may become warranted to increase the federal funds rate sooner or at a faster pace than participants had earlier anticipated.”

While the Fed began to scale back its asset purchases in January, uncertainty still lingers regarding the implementation and quantity of rate hikes. As copper prices have a historically inverse relationship with the U.S. dollar, the Fed’s efforts to address inflation will add downward momentum to copper prices. The Fed will reconvene Jan. 25-26.

China’s leading copper smelters will keep treatment charges unchanged, Reuters reported, during the first quarter of 2022. The spot rates will hold at $70 per ton and 7 cents per pound, still 32% above the first quarter of 2021. The China Smelters Purchase Team (CSPT), which includes Jiangxi Copper, China Copper and Tongling Nonferrous, among others, will adhere to the charges when processing imported concentrate.

Meanwhile, miner Freeport-McMoRan made a separate agreement with Chinese smelters in mid-December. Treatment charges for 2022 will rise by 9.2% year over year, to $65 per ton and 6.5 cents per pound. The increase follows six consecutive drops in annual treatment charges since 2015. By late December, Chilean miner Antofagasta PLC followed Freeport-McMoRan and agreed to the same charges.

Copper treatment and refining charges (TC/RCs) are paid to smelters by miners for the processing of copper concentrate in order to offset the cost of ore. Charges fluctuate based upon the tightness of concentrate supply.

Production starts at China’s Qulong mine

The Qulong mining complex is being constructed in two phases and is designed to become the largest global copper mine. Once Phase 1 of the Quolong mining project reaches full capacity, annual production will extend to 160,000 mt. Phase 2 of the mining project, upon completion, will have an expected annual capacity of around 260,000 metric tons.