European zinc producers will continue to face volatile energy costs until more renewable sources and LNG gas become more accessible, industry watchers said.
“Zinc smelters are really struggling as electricity is a bigger proportion of the cost compared with copper or nickel smelters,” one analyst told MetalMiner. This has led to rising zinc prices.
Renewables just not a viable option
The availability of renewable power for zinc smelting and production at present is limited and, at present, is not an option, sources also said. “You’ve just got to wait until the energy price turns around,” a second analyst stated. A smelter could build its own plant, but sources warned that such projects take years to come to fruition. Producers could have difficulties in securing needed permits from local and national authorities.
“In the short-term it would be very hard” a third source stated. Installing LNG infrastructure is also unlikely to alleviate costs, the third source added. “Bear in mind that they are buying from utilities,” which will also charge market rates, that source also said.
The free Renewables MMI report tracks monthly inflation/deflation
Low storage volumes and political tensions
High energy costs in Europe stem partly from high energy prices that began in 2021 due to low gas storage volumes within Europe, following a cold winter.
Tensions between the West and Russia, which supplies about 35% of Europe’s gas requirements, have also seen the latter slow its gas supplies to Europe. Russia has built up forces of approximately 130,000 soldiers and heavy weaponry on Ukraine’s eastern borders as well as from the north via Belarus, sparking fears of an invasion into the country.
The main point of contention – the North Atlantic Treaty Organization’s prospective eastward expansion, particularly into Ukraine. Russian President Vladimir Putin wants a guarantee from the West that neither Ukraine nor Georgia would ever join NATO. Russia also wants NATO forces withdrawn from newer alliance members, which joined in the 90s and 00s. These include the Baltic states of Estonia, Latvia and Lithuania as well as Poland and Hungary.
MetalMiner’s weekly newsletter tracks these and other developments and provides additional market insight
US government officials describe the Russian demands as a “non-starter,” though Ukrainian President Volodymyr Zelensky indicated on Feb. 14 that Ukraine may be willing to slow its path towards NATO accession. The situation at the border now remains very fluid.
President Joe Biden has also warned of unprecedented sanctions against Russia in the event that that country’s military does invade Ukraine, and fears that Russia could cut gas supplies into Europe in retaliation.
Natural gas prices remain high
The Dutch TTF natural gas price for the European Union on Feb. 14 hit €80.77 ($91.49) per megawatt hour. That price appears lower than the €93.55 ($109.49) on Jan. 21. However, it remains several times higher than the €16.71 ($18.96) reported on Feb. 16., data from Trading Economics showed.
The crunch on steel producers has pushed up prices for the base metal since last October. Moreover, analysts predict the zinc deficit will reach 320,000 metric tons in 2022, up from December’s forecast of 180,000 metric tons. 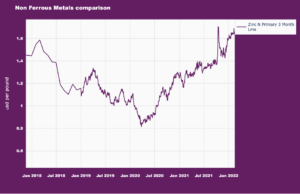 Source: MetalMiner Insights
This has translated to higher prices as shown in the chart above. The London Metal Exchange’s official, 3-month bid price to $3,631 per metric ton on Feb. 14, up 28.3% from $2,827.50 on Feb. 15, 2021. Seasonality may lessen the price rise as the northern hemisphere goes into spring, however.
High costs yield smelter closures
The challenges wrought by high energy costs and potential impacts are nothing new to European zinc smelters, however, a third source noted. “This situation has been going on since last year,” he noted. Take for example, Nyrstar’s French smelter at Auby. This site began care and maintenance in January, citing historically high energy prices. The plant operated on a week-by-week basis earlier that month, according to French media reports.
Auby can produce up to 170,000 metric tons per year of refined zinc, though requires up to 730 GWh to achieve this. Electricity provider Électricité de France also announced in January its plans to take two nuclear power stations off stream as it discovered faults on a pipe on their respective safety systems. Two other nuclear power plants will also go off stream.
Zurich-headquartered Nyrstar, in which multinational commodities trader Trafigura owns a majority stake, also announced in October plans to halve production at Auby along with the Budel and Balen sites, respectively in the Netherlands and Belgium. Meanwhile, mining and commodities trading multi-national Glencore, also announced in December plans to place its Portovesme works, on Italy’s island of Sardinia, on care and maintenance.
Portovesme can produce 100,000 metric tons per year of finished zinc. In each case, the plants’ respective owners noted that the closures would last until it becomes feasible to reopen them.
Besides taking a shift in policy, placing those facilities on care and maintenance can require two weeks to shut down.  Ramping them back up again can take up to two months as the smelters need to acquire feedstocks, the first source said.
“You could quite easily see them out for six months,” that source noted.
There were also reports that high energy prices had prompted Bulgarian zinc smelter KCM to halt production in August, local reports said at that time, though the first source said that this might not be the case. KCM’s current status appears unclear and the company was unavailable for comment.
Sweden’s Boliden to the rescue
Zinc producer Boliden of Sweden has continued operating without any issue, despite Europe’s higher energy costs. Sweden relies upon hydro and wind as well as nuclear.
Refined zinc production in Q4 from the Odda and Kokkola smelters, respectively in Norway and Finland, totaled 116,656 metric tons. That volume fell 8% from the 126,730 metric tons smelted over the same time in 2020. That came as a result of a planned outage at the Finnish site, data and information from Boliden showed.
Zinc prices could remain relatively high for the medium term.