The London Metal Exchange’s (LME) nickel price shot up by more than $1,000/mt on Friday Feb 25, a rise that one analyst directly connected to Russia’s invasion into Ukraine.
The official, three-month nickel bid price reached $25,625 per metric ton on Feb. 24, The price increased 4.3% on the day from $24,575/mt, data from the bourse showed. 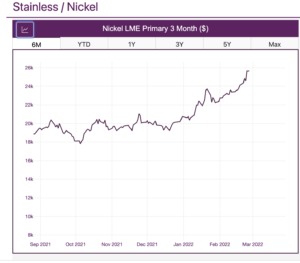 Source: MetalMiner Insights
Therefore, prices could continue moving higher. Russia’s Norilsk Nickel serves as a major provider of nickel to global markets, an analyst told MetalMiner.
Moreover, Russia provides over 7% of global nickel production. Norilsk’s sales volume for 2021 reached 193,000 metric tons. This represents an 18% drop from the 235,709 metric tons produced in the previous year.
Sign up for MetalMiner’s weekly newsletter to stay on top of all global metals markets developments
LME warehouse stock levels
In addition, stocks of the metal in LME’ warehouses fell to 96,308 metric tons in January. This represents a 61.3% drop from the 248,962 metric tons for the same month in 2021, data from trading company Westmetall showed.
Although Europe’s need for nickel makes it unlikely that the company would directly come under sanctions, the analyst believed that measures to cut Russia’s access to capital markets in the West would further push up global nickel prices. That, in turn, could delay the company’s projects.
“I can see the squeeze on the finance side,” the analyst noted.
The alternative could drive Norilsk to seek financing from China. This could turn into offtake agreements as one method of payment. This could cause the company to become more reluctant to sell to non-Chinese markets.
Join the MetalMiner team for a 30-minute briefing on the aluminum and carbon steel markets as a result of the Russian invasion of Ukraine. The webinar runs from 11:00-11:30 central time on Wednesday, March 2.
Sanctions issued
The European Union announced in the early hours of Feb. 25, a row of sanctions against Russia.
European Commission President Ursula von der Leyen stipulated a five-pillar plan, which “includes financial sanctions, targeting 70% of the Russian banking market and key state-owned companies, including in defense.”
In addition, other sanctions will limit Russia’s access to technology. These sanctions could cover semiconductors or cutting-edge software, von der Leyen said.
Finally, the United States also introduced sanctions on Feb 24 against two of Russia’s largest financial institutions. These include the stet-owned VTB Bank and Sberbank. Those actions could cut their direct access to the dollar.
Ed Note: MetalMiner will publish a follow-up piece on the likely impact of sanctions on Monday, Feb 28
Stainless and electric vehicle batteries
About 70% of refined nickel goes to stainless steel production, specifically for austenitic, the analyst stated.
Another application for nickel is in batteries, such as for electrical vehicles, though the purity levels for that application do not need to be as stringent, the analyst added.
Companies can track the impact on metals prices by signing up for our Monthly MMI reports. The Stainless MMI, the Renewables MMI and the Automotive MMI all provide a gauge of inflation/deflation for global metals markets
Norilsk reported a full year EBITDA of $10.5 billion, up 37% year on year from about $7.67 billion the company on Feb. 10.
In addition, consolidated revenue was 15% higher at $17.9 billion, from almost $15.6 billion.