The EU has announced an end to the temporary suspension of anti-dumping duties on rolled aluminum products into the block. The suspension was set to expire in July. The news comes hot on the heels of last week’s announcement that the UK would establish provisional duties for six months while it carries out an anti-dumping investigation into imports of aluminum extrusions from China.
The European Commission performed a similar investigation last year with regards to Chinese aluminum plate, sheet, strip, and foil products. On October 11th, they released findings stating that the dumping margin was between 14.3%-24.6%. Though the commission implemented anti-dumping measures, they suspended the ruling for nine months due to the tight market in the wake of the pandemic bounce back.

The Decision Was a Long Time Coming

Come March, the EC consulted with the involved parties to decide whether it was necessary to continue to extend the suspension period. They concluded there was sufficient spare capacity in the European market. On average, utilization was found to be running at about 80%. This proved more than satisfactory for the measures to be reintroduced.
That brings us to this week. As stated, the European Commission has officially announced it will re-implement anti-dumping duties after the extension expires on July 12th. During the investigation period (July 1st, 2019 – June 30th, 2020), the EU imported around 170,000 mt of products which ere involved in the case from China. For scale, this is more than the entire annual flat-rolled aluminum consumption of the UK.
The products involved included coils or coiled strips, sheets, or circular plates with a thickness of 0.2 mm – 6 mm. It also included aluminum plates with a thickness of over 6 mm, and aluminum sheets and coils with a thickness of 0.03 mm – 0.2 mm. That said, the case excludes related aluminum products used in manufacturing cans, cars, and aircraft parts. It’s likely that this is the result of effective consumer lobbying.
Keep yourself up-to-date on what’s going on with aluminum prices, steel prices, and more. Sign up for the weekly MetalMiner newsletter here.

Rolled Aluminum is a Big Deal to “Big China”

The decision is set against a backdrop of soaring Chinese aluminum exports. The surge stems, in part, from a lower SHFE primary price relative to the LME and increased VAT rebates for exporters. There has also been a boost in domestic aluminum production in China thanks to relaxed energy restrictions and COVID lockdowns, which has slowed consumption. 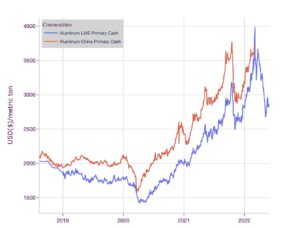 Source: MetalMiner Insights
The MetalMiner Insights platform includes a broad range of aluminum global prices, short term and long term forecasts, buying strategies and should cost metals.
It’s true that the EU’s move may not stem the flow of Chinese metal on its own. However, the original investigation found that duties set at or around the range of under-pricing (14-25%) may result in the market simply paying the cost. This might not apply to standard commercial product. However, for higher alloys, European availability remains tight despite what the EC may believe.

Some Duties do More Harm Than Good

When the UK applied 35% duties to Russian material last month, most of the market just paid it. Of course, the material in question was already in transit, and there were no ready alternatives. Still, it’s indicative of the fact that when countries impose import duties, it often fails to penalize the producer. Instead, it leaves the burden with the importer or, more likely, the consumer.
Duties can dissuade further purchases in the longer term, assuming the market is sufficiently well served with alternative supply options. But while markets remain tight, they can end up lifting the market price consumers are forced to pay from all suppliers. This even includes those suppliers not impacted by the duties. In their case, they can simply take advantage of scarcity, inflating prices to just below the anti-dumping level.
That was certainly the case under 232 in the USA. It’s likely to be the case in the EU and UK. It could very well be the case until market softens and metal becomes so readily available that suppliers have to fight for business.
Keep yourself informed of changes in the fast-moving metals marketplace with MetalMiner’s monthly MMI Report. Sign up here to begin receiving it completely FREE of charge. If you want a serious competitive edge in the metals industry, try a demo/tour of our revolutionary insights platform here.