The Stainless Monthly Metals Index (MMI) increased by 8.2% for this month’s reading. 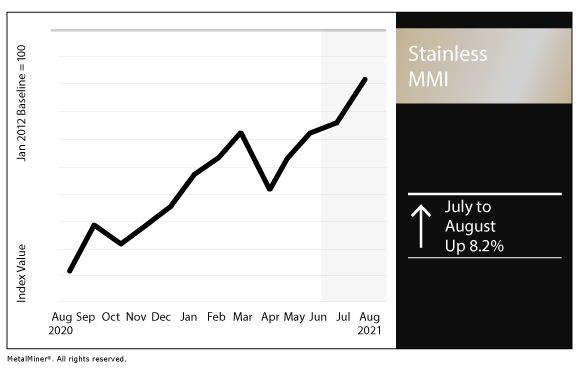 Stainless steel producer Outokumpu released its half-year report, reporting that their sales increased by 16.8% for the first half of 2021 compared to last year.

Despite a growing first half, Outokumpu expects global apparent consumption of stainless steel flat products to fall by 0.4% in the third quarter of 2021 compared to the previous quarter. The company’s outlook is based on CRU latest estimates, which anticipates a decrease in consumption of 10.5% and 0.7% in EMEA and Americas respectively, while APAC is expected to increase by 1.6%.

MetalMiner stainless steel expert Katie Benchina Olsen expects a tight U.S. stainless flat-rolled supply through the rest of the year. That will continue into at least the second quarter of 2022, she says. Imports into the U.S. are also limited, as demand in home markets remains strong. In addition, shipping containers are in tight supply.

This domestic environment might keep stainless steel prices high through the first half of 2022.

The nickel market recorded a deficit of 42,700 metric tons for the January to May period after an approximate surplus of 92,700 metric tons for all of 2020, according to the World Bureau of Metal Statistics (WBMS). While refinery output increased, demand has outpaced refined production, thus bringing prices up.

Chinese refined output for the January to May period increased by 44,000 metric tons compared to 2020, WBMS reported. Meanwhile, apparent demand reached 564,900 metric tons (123,000 metric tons higher than in the previous year). In Indonesia, production in the first five months of 2021 rose 49% year over year and demand more than doubled.

Manufacturers are being forced to buy 304 at the spot price in order to keep production lines running.

When the mill is late, the only alternative right now is 304 — at a huge price premium.

Ultimately, the global stainless supply shortage will impact such products as commercial ovens, which are usually made with 430. The price differential between 430 and 304 should theoretically be around $0.65/lb at present. In reality, however, buyers are paying around $2.00/lb more for 304 on the spot market compared to the 2021 430 contract price.

Manufacturers are being forced to choose high-priced 304 to remain in production or shut down lines until the contracted material arrives.

Check if your service center is providing you with price transparency for your stainless spend (e.g. base price + adders).

The Renewables Monthly Metals Index (MMI) dipped by 0.8% for this month’s index reading. 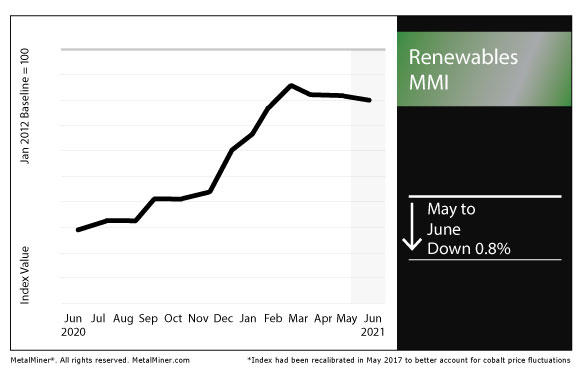 Earlier this year, the LME cobalt price surged as high as nearly $53,000 per metric ton.

However, the second quarter has been a different ballgame.

The LME cobalt price closed Monday at $42,500 per metric ton, or down approximately 20%.

G7 leaders convened in Cornwall in the United Kingdom for the 47th G7 Summit from June 11-13.

Among a variety of issues, leaders of the G7 member states affirmed their commitments toward tackling climate change.

In a communiqué released after the summit, the leaders committed to supporting a “green revolution” that creates jobs, cuts emissions and limits the rise in global temperatures to 1.5 degrees.

“We commit to net zero no later than 2050, halving our collective emissions over the two decades to 2030, increasing and improving climate finance to 2025; and to conserve or protect at least 30 percent of our land and oceans by 2030,” the communiqué reads. “We acknowledge our duty to safeguard the planet for future generations.”

The leaders reconfirmed their commitment to the Paris Agreement. President Joe Biden brought the U.S. back into the agreement after former President Donald Trump had withdrawn from it.

The communiqué also highlighted the need to transition away from coal power and toward renewables.

“Recognising that coal power generation is the single biggest cause of greenhouse gas emissions, and consistent with this overall approach and our strengthened NDCs, domestically we have committed to rapidly scale-up technologies and policies that further accelerate the transition away from unabated coal capacity, consistent with our 2030 NDCs and net zero commitments,” the communiqué continues. “This transition must go hand in hand with policies and support for a just transition for affected workers, and sectors so that no person, group or geographic region is left behind.”

The Trump administration launched a Section 232 investigation in 2018 that resulted in tariffs on steel and aluminum.

This month, the Biden administration released a report with officials’ findings and recommendations.

“Neodymium (NdFeB) permanent magnets play a key role in motors and other devices, and are important to both defense and civilian industrial uses,” the report states. “Yet the U.S. is heavily dependent on imports for this critical product. We recommend that the Department of Commerce evaluate whether to initiate an investigation into neodymium permanent magnets under Section 232 of the Trade Expansion Act of 1962.”

Speaking of coal and the transition toward renewables, miner Anglo American announced it is demerging its thermal coal operations in South Africa.

“We have consistently believed in a responsible transition from thermal coal, being a transition that seeks to balance the needs and expectations of all stakeholders,” CEO Mark Cutifani said in a June 7 statement. “The demerger of Thungela lives up to that promise by bringing our employees, shareholders, host communities, host government and our customers along with us.”

Thungela will trade as an independent company on the Johannesburg Stock Exchange.

The MMI for grain-oriented electrical steel (GOES) fell by 1.7% for this month’s reading. 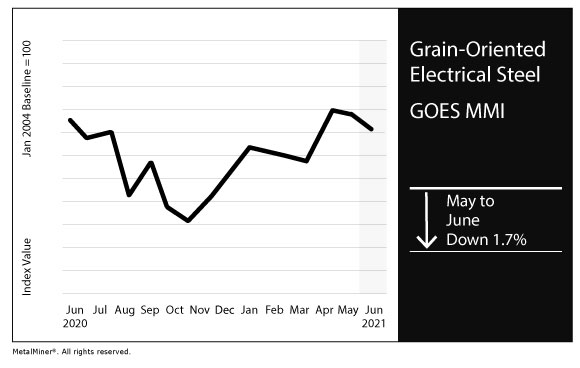 Within the Renewables MMI basket, the U.S. steel plate price rose by 7.8% month over month to $1,320 per short ton to open the month.

Firstly, we want to wish all of our readers a Happy New Year!

Last year was a tumultuous one to say the least.

The coronavirus pandemic dominated the world’s attentions for much of the year. Economies struggled amid dropping demand and supply-chain challenges.

The rollout of vaccines last month offered some hope, but there remains a long road ahead.

But with that, we will officially turn the page on 2020. Once again, we wish all of our MetalMiner readers around the world a Happy New Year!

September 2020 housing starts in the U.S. got a big boost on a year-over-year basis, the Census Bureau and Department of Housing and Urban Development reported.

Starts reached a seasonally adjusted annual rate of 1,415,000 in September.

Meanwhile, single-family housing starts in September hit at a rate of 1,108,000, or up 8.5% from August. In addition, the September rate for units in buildings with five units or more reached 295,000.

END_OF_DOCUMENT_TOKEN_TO_BE_REPLACED

The coronavirus outbreak and ensuing mitigation efforts have also had a significant impact on the housing sector.

END_OF_DOCUMENT_TOKEN_TO_BE_REPLACED

Before we head into the weekend, let’s take a look back at the week that was and some of the metals storylines here on MetalMiner, including coverage of: oil prices, Section 232 steel tariffs, the gold market, PMI numbers, steel production and more.

END_OF_DOCUMENT_TOKEN_TO_BE_REPLACED

Before we head into the weekend, let’s take a look back at the week that was and some of the metals coverage here on MetalMiner, including: the Federal Reserve’s recent industrial production report, the U.S.’s December boom in housing starts, the U.S. steel sector’s capacity utilization rate and the International Monetary Fund’s latest growth projections.

END_OF_DOCUMENT_TOKEN_TO_BE_REPLACED

This Morning in Metals: U.S. Steel Imports Fall in August

This morning in metals news, U.S. steel imports fell in August compared with July, House Speaker Nancy Pelosi called for the beginning of an impeachment inquiry of President Donald Trump and Indian mining companies are concerned about the impending expiration of leases for non-captive iron ore mines.

The August steel import level marked a decline from the 2.7 million metric tons imported in July.

As a result, stock markets dipped Tuesday morning, but recovered later in the day.

The CBOE’s volatility index, the VIX, reached a three-week high, ascending to 17.77 early Wednesday before dipping just below 17 later this morning.

According to the Economic Times, concerns abound in India regarding the expiration of 31 non-captive iron mines March 31.

RK Sharma, secretary general of the Federation of Indian Mineral Industries, told the Economic Times that the mines in question account for 45% of the domestic steel industry’s iron ore requirements.

A new Cold War — does that sound ridiculous? Does it sound alarmist?

It would have been a month or more back, but today it is a plausible statement.

A post by Edward Luce in the Financial Times refers to a Bloomberg expose reporting on how China’s People’s Liberation Army has installed secret micro-chips on motherboards that were used to operate big corporate data servers, giving them unprecedented access to American military and technology secrets on an epic scale.

The microchips are said to be smaller than a grain of rice and thinner than the tip of a sharpened pencil, yet could provide backdoor access into the most secret of American technology. We quote Luce when we say, according to Bloomberg, China may have infiltrated U.S. military hardware, including drones, fighter jets, and so on.

It must be said, major retail hardware providers like Apple vehemently denied the existence of such malicious chips, but Bloomberg’s investigation has been going on for three years and begs the old saying — no smoke without fire.

The investigation apparently is still ongoing. But the consequences, coming on top of an escalating trade war and recent military skirmishes in the South China Sea, herald a new superpower rivalry.

There may be some who scoff at the suggestion that China could rival the U.S. as a superpower, but that is to misunderstand the trajectory of history.

China is on the rise, faster in terms of technology than it is even economically.

Take these secret microchips. As Luce points out, the creation and clandestine inclusion of such sophisticated technology is so hard to pull off that it was likened by a professional hacker to getting a unicorn to jump over a rainbow. It would take years, the article suggests and the deepest knowledge of how to manipulate the most cutting-edge technology across the global supply chain, for China to do this — yet, it did.

Roughly 75% of U.S. smartphones and 90% of semiconductors are made in China; it is safe to bet that domination is set to decline, but it can’t happen overnight.

In a heated and politically charged scenario, it is not unrealistic to think government will mandate or reward firms that reshore technologically sensitive supply chains, with profound implications for what has become a hugely interdependent world.