The Aluminum Monthly Metals Index (MMI) rose for the second consecutive month by 8 points to 138. 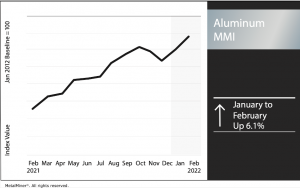 Aluminum prices rebounded after a recent correction in December. Prices have begun to trade sideways. Market sentiment will soon tell whether prices rally past recent highs or see a minor correction.

Market uncertainty looms as the standoff between Russia and Ukraine remains ongoing. A build-up of Russian troops along the Ukrainian border triggered the deployment of U.S. troops to Eastern Europe. MetalMiner contributor Sohrab Darabshaw recently examined potential implications on metals markets of a Russian incursion into Ukraine.

Among the market concerns, energy prices. Europe continues to grapple with an energy crisis that pushed natural gas prices nearly five times higher than where they stood just one year ago. Russia accounts for around 35% of Europe’s natural gas supplies. These supplies come by way of the Nord Stream 1 pipeline that crosses through Ukraine. The Nord Stream 2 pipeline, scheduled for completion in September would have doubled the amount of gas transferred from Russia to Germany. This project now appears paused. Numerous aluminum smelters have already shuttered or curtailed production as soaring energy prices eroded profitability. More could follow. Between both China and Europe, global capacity cutbacks have reached nearly 4 million tons.

Should war break out, sanctions will likely follow. MetalMiner’s own Stuart Burns examined the effects of the 2018 Rusal sanctions on the aluminum market back in 2020. Russia produced around 3.6 million metric tons of aluminum in 2020 and serves  as the second-largest aluminum producer in the world. . Sanctions, even if not directly applied to the aluminum market as happened in 2018, could stymie trade amid already tight supply. That, in turn, could push the already high aluminum prices barreling upward. At present, a sanctions bill from the U.S. is currently under negotiations in the Senate.

In a bit of good news, Novelis announced plans in mid-January to construct a $365 million automotive recycling facility in Kentucky. The plant, scheduled to come online in 2024, will have an estimated 240,000 mt capacity and will recycle aluminum scrap from decommissioned vehicles as well as automotive production.

Meanwhile, Alcoa’s Intalco Works smelter located near Ferndale, Washington could potentially restart. Alcoa had idled the plant in the spring of 2020 amid falling metal prices and weak demand. Aluminum prices have since rebounded, however, as the market grapples with tight supply.

After Section 232 trade negotiations appeared to have halted late last year, the U.S. and Britain agreed to restart talks with aims to resolve ongoing trade disputes in mid-January. While no timeline or dates were announced, the discussions follow the EU’s successful establishment of a tariff rate quota system with the U.S. and come alongside similar requests from both Japan and South Korea. Discussions between the U.S. and UK will also address the ongoing retaliatory tariffs on U.S. products, which levy a 25% duty on items including whiskey, tobacco and motorcycles.