Current impact of the Russian invasion of Ukraine on the European metals market, metal prices

To say the situation in Ukraine — and its impact on metal prices _— is constantly evolving situation would be an understatement. No sooner is the position defined when new developments put previous assessments out of date. 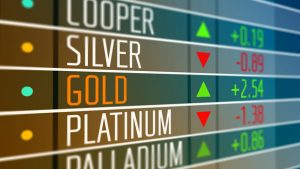 Nonetheless, we will do our best to address many of the developments as they are evolving this week.

Furthermore, MetalMiner newsletter subscribers can find additional analysis of the ongoing situation in Ukraine and its potential impact on metal prices in upcoming editions of the MetalMiner weekly newsletter.

Firstly, as we think about metal prices, let’s look at metal supply.

Both Russia and Ukraine are significant metals exporters and major suppliers to the European market. Ukraine exports some 80% of its steel and is a major supplier to the region of iron ore and alumina for making aluminum.

Ukrainian steel mills rapidly wound down when hostilities started. Inventory held at the mills and ports is largely moribund due to a lack of civilian road, rail and shipping services.

Logistics from Russia are not as dire so far. However, moves by some Western countries to ban Russian flights and vessels from calling at their ports will hamper movement of goods. So far, border posts remain open and road haulage is flowing freely. Even so, a significant hurdle is looming there, too.

Secondly, after a slow start, Western countries have been remarkably coordinated in applying sanctions on Russian banks in the form of a denial of access to the SWIFT payments platform. The SWIFT ban applies to about 70% of Russia’s banking activities. It is not a total ban. Notably, oil and natural gas payments are excluded. This is unlikely to change, several European countries economies and the whole European natural gas market would grind to a halt without Russian gas (and to a lesser extent oil).

In interviews with Russian producers, MetalMiner has heard firms are actively setting up European banking arrangements to get around the current and possible extensions to the payments ban by accumulating remittances from their European clients in the E.U.

How they are then offset against debts owed to the European banks in Russia is likely a complex process. However, it gives the Russian exporters a work around, for the time being.

The base metals markets were tight before the invasion.

Not surprisingly, they have reacted with further price rises to levels not seen in a decade. Among the gains in metal prices, aluminum is flirting with $3,500 per metric ton. 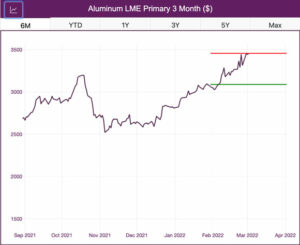 Russia is a major supplier to the European market. Furthermore, the rise in natural gas prices will further inflate energy costs in Europe. Those rising costs have already prompted partial closures of European smelters before this started.

Nickel and zinc prices have also risen. While zinc faces the same power cost dynamics as aluminium, prices haven’t risen as much in percentage or absolute terms. That reflects Russia’s lesser role in the zinc market.

Russia itself will face raw material constraints, partly as a result of the financial sanctions – trouble making payments overseas – but also because Ukraine is a significant supplier to Russia. Rusal has already had to close its Nikolaev alumina refinery in Ukraine, citing logistics problems shipping out the Black Sea. Raw material supply may not immediately impact Russian exports of finished products. However, it will challenge the economy in the weeks to come as the domestic supply chain becomes more constrained.

Russia does have other options for its exports.

China has become a major consumer of Russian oil, natural gas and metals. Those supply lines will remain open. As such, they’ll provide a source of funds for the Russian economy and treasury.

The modest reaction of the iron ore price in Asia is probably a reflection that the Russian-Ukraine war is having limited impact on the Asian region so far.

The question on everyone’s lips is “what next?”

There we are in the realms of conjecture.

Negotiations at the Ukraine-Belarus border are ongoing but making precious little progress. In reality, both sides are far apart. Events on the ground will likely grind on with significant loss of life on both sides before there is any willingness to compromise.

Outright occupation of Ukraine would be a nightmare for Russia. Its end game has to be some form of recognition for the disputed eastern provinces and Crimea. In addition, it will want assurances Ukraine will not join NATO, none of which Ukraine appears willing to accept.

If anything, both Ukraine and the West’s positions have hardened since last week. An escalation in fighting, threats and tension appear likely in the short term.

We will continue to provide analysis of the ongoing situation in Ukraine  — in addition to other notable trends in metals markets — in this month’s upcoming Monthly Metals Index series. Last month’s report is available for download.