Recession fears have so far been focused largely on the US. However, a recent note from Capital Economics to their clients predicts that we’re much more likely to see a recession in Europe.

Are US Recession Fears Really Valid?

Most US economists’ recession fears resulted from last month’s brief inversion in the spread between two-year and 10 -year US Treasury yields. Historically, this curve has inverted ahead of every US recession in the past 50 years. In fact, there has only been one significant false positive, and it was back in 1998.

As expected, economists warned that ignoring the yield curve would essentially be “betting against history.” However, CE suggests that large-scale central bank asset purchases over the last decade have distorted the dynamics driving the curve. In their opinion, this has disconnected the relationship between short- and long-term yields.

Recession or not, metal prices are moving constantly day to day. Receive all the latest news from the weekly MetalMiner newsletter here.

A Closer Look at the Figures

Consider the two-year chart “short term” instead of the 90-day. In doing so, it becomes clear that the relationship between the two and 10-year chart is not actually showing any inversion. According to most economists’ logic, this does not indicate a coming recession. At least, not yet.

CE has also advised that the US household balances are unusually strong from a historical standpoint. They go on to suggest that it’s much more likely that tighter Fed policy will soon mix with the easing of post-COVID supply chain frictions. This may cause the economy to cool a bit, but it should help avoid an all-out recession.

Recession Fears Point is Across the Pond

Unfortunately, the real recession red flags are in Europe. For one thing, trend growth is already much lower there (1% compared to 2% in the US). This leaves much less margin for error. Secondly, Europe is a larger net importer of commodities than the US.

So, as commodity inflation trickles down to prices, inflation risks overshooting even the historically high estimates currently being discussed. If this happens, it would likely culminate in the deterioration of both consumer spending and investment. 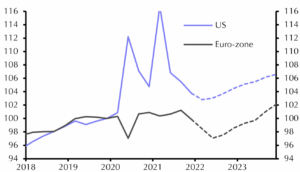 Whether Europe falls into a mild technical recession or simply stagnates for 2 or 3 quarters may not make any material long-term difference. However, Europe’s under performance will be a drag on global growth, no matter how soft or hard the landing. Moreover, it will likely usher in subsequent years of slower growth than we might have anticipated just 6-12 months ago.

Clearly, a lot will will depend on how aggressively the ECB raises rates. Right now, the markets are expecting 0.25% by year-end, but CE is less confident. Recently, they suggested that the first quarter point could come as soon as July. Such aggressive tightening could spook already fragile sentiment. This is especially likely if it comes on top of falling real incomes relative to this year’s high inflation.

Metal prices have already been hit by a surging dollar this week. There have also been sharp sell-offs in aluminum, copper, and palladium, in particular. It’s almost as if markets have finally woken up to the changing fundamentals.

The easiest way to keep yourself informed about moves in the metal marketplace is MetalMiner’s monthly MMI Report. Sign up here to begin receiving it FREE of charge. For a real competitive edge in the metals industry, try a demo/tour of our revolutionary insights platform here.