by Irene Martinez Canorea on February 8, 2018

The Copper MMI (Monthly Metals Index) traded lower this month, falling one point for a February reading of 87. The fall was driven by a slight retracement of copper prices, which had skyrocketed in December. In January, LME copper prices fell by 1.21%. 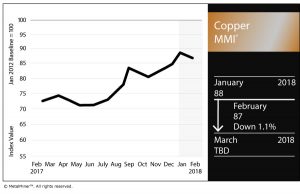 Despite the price retracement, LME copper prices held above the $7,000/mt level at the beginning of February, and fell below this level during the second week. Trading volumes still support the uptrend. Copper prices could continue their rally.

Need buying strategies for copper in 2018? MetalMiner’s Annual Outlook has what you need

Mine strikes continually threaten copper supply. BHP’s Escondida mine, the world’s largest copper mine, failed to develop a new labor agreement in advance of formal negotiations, scheduled for June. Last year, a 43-day strike at the Escondida mine impacted copper supply.

Since BHP’s Escondida copper mine produces around 5% of the world’s copper, it’s easy to see the impact of strikes on LME copper prices.

Meanwhile, Glencore forecasts its own copper output to increase by 150,000 tons at its Katanga mine in the Democratic Republic of Congo. 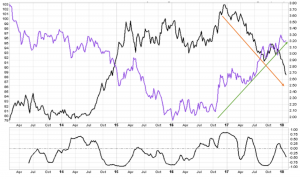 The U.S. dollar traded sideways during Q3 2017. Many analysts (not MetalMiner) started to believe  the U.S. dollar had reached a bottom.

MetalMiner, however, remained more bearish on the U.S. dollar, as the dollar did not give any clear signs of a trend reversal. The distinction between a short-term trend that could impact prices in one to three months, versus a long-term trend, which could actually impact a buying strategy becomes important. The fact remains, the U.S. dollar has fallen to a more than three-year low.

In January, several Chinese copper scrap restrictions went into effect. The Ministry of Environmental Protection announced that only end-users and copper scrap processors will be allowed to import. This restriction in effect removes Chinese traders from the copper scrap market.

In January, buying organizations had some opportunities to buy some volume. The weak U.S. dollar and strength of other base metals support the bull narrative for copper. As long as copper prices remain bullish, buying organizations may want to “buy on the dips.”  For those who want to understand how to reduce risks, take a free trial now to the MetalMiner Monthly Outlook.

In January, most of the prices comprising the Copper MMI basket decreased.