The Global Precious MMI (Monthly Metals Index) picked up one point this month, rising to 92 for our February reading. 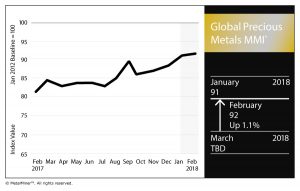 Palladium on the Decline

The U.S. palladium bar price moved past the platinum price last year, hitting $928/ounce as of Oct. 1 compared with $910/ounce for platinum.

This month, palladium dropped 5.8% month over month, while platinum picked up 6.2%. All in all, it seems as if the markets for the two platinum-group metals (PGMs) are moving toward the historical dynamic.

As reported by Kitco News, the palladium price has fallen three weeks in a row. Palladium’s run of trading at a premium to platinum may be coming to an end — that will be something to keep an eye on going forward.

One might have thought that this week’s massive equities selloff — resulting in the Dow’s biggest-ever intraday drop — would have offered support for gold, the safe-haven metal turned to in times of volatility. (VIX, the index tracking volatility, spiked on Monday and early Tuesday, in tandem with the selloff.)

The VIX index over the last month, showing the spike beginning Monday, Feb. 5, and peaking the morning of Feb. 6. Source: Chicago Board Options Exchange

However, the selloff did not seem to benefit gold. According to a MarketWatch report, gold futures hit a one-month low on Wednesday.

Speaking of gold, interest in the metal is picking up in China, Bloomberg reported, as a “property boom” in the country has injected life into the consumer market for the precious metal.

On the other hand, the global supply of gold plateaued last year, according to the Financial Times, and China’s output fell by 9% in 2017. According to the same report, global gold output had picked up every year since 2008 (until this past year).

“It’s not surprising to see overall gold demand down given the backdrop of monetary policy tightening and strong equity markets in 2017, but the market is not in bad shape,” said Alistair Hewitt, head of market intelligence at the World Gold Council, in a prepared statement. “The US dollar gold price was up 13% and institutional investors, especially in Europe, continued to add gold to their portfolios as a hedge against frothy asset prices and geopolitical uncertainty. Jewellery demand picked up as economic conditions improved in China and a policy change in India removed a barrier to demand, while next-generation smartphones boosted gold demand from technology companies.”