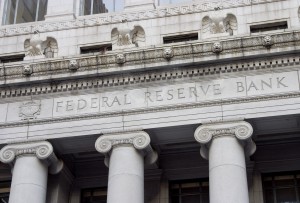 The facade of the Federal Reserve Bank. Aaron Kohr/Adobe Stock

We tend to hear the pronouncements of the Federal Reserve and take them as the all-knowing position of the Fed chairman with the unanimous support of his or her colleagues. Yet in actual fact, even arriving at a rate setting decision, let alone scoping the media announcement afterwards, requires extensive debate and the balancing of often fundamentally opposing views amongst the members of the Fed rate setting committee.

The market expected prior to the recent volatility in share prices that the Fed would raise the reserve rate at its next meeting in March. That may still be the case, but comments reported in Bloomberg by James Bullard, president of the Federal Reserve Bank of St. Louis, highlight just how wide the range of views can be among the state Fed chairmen, ranging from doves to hawks.

Bullard led by saying the recent stock market rout was the most predicted selloff ever and should have come as no surprise given the elevated valuations of technology stocks and the absence of any recent price falls. “Something that has gone up 40% like the S&P tech sector will at some point have a sell-off,” Bloomberg quoted him as saying.

Not that Bullard believes that the market is correct in interpreting a surge in average hourly earnings as contributing to the rising Treasury yields. Bullard does not see wage growth as currently inflationary and remains confident that inflation will not derail robust U.S. GDP growth in the year ahead, saying he doesn’t see a need for the Fed to raise rates further while inflation is stuck below the central bank’s 2% target.

Indeed, Bullard appears more concerned with long-term, persistently low U.S. growth and although he is not among those Fed chairmen who will be voting on monetary policy this year, his still influential position is that there is little need to raise interest rates much in 2018.

Compare that to incoming Fed Chairman Jerome Powell, who is expected to follow Janet Yellen’s line of cautiously raising rates.

The market was widely expecting three rate rises in 2018 from Powell, but in recent weeks stronger wage growth and rising concerns about inflation have prompted more hawkish voices to call for four, with the first in March and the last one in December 2018.

What is less clear is what his policy will be on reversing quantitative easing. Considerable debate remains on how quickly the central bank should move on normalization and unwind the Fed’s $4.5 trillion balance sheets.

Hawks point out sooner or later there will be another recession (the current bull market, if it continues, will become the longest in history later this year).

At present, the Fed has little or no tools left in the bag to tackle another recession — with rates still low and a massive balance sheet, it hardly needs to add more.