Home | Anti-Dumping | How Has the Rest of the World Reacted to Trump’s Section 232 Announcement?
Industry News, Market Analysis

How Has the Rest of the World Reacted to Trump’s Section 232 Announcement?

Steel and aluminum producers in the U.S. applauded the move. Meanwhile, U.S. stock markets reacted negatively with the Dow plunging 586 points at one stage before managing something of a recovery to close more than 400 points down yesterday.

Markets will adjust, but foreign governments have reacted with equal dismay.

Not surprisingly China was the most diplomatic, expressing “grave concern” and according to The Guardian newspaper, adding “China urges the US to exercise self-restraint, not to implement trade protection tools, confront multilateral trading rules and make a contribution to global trade regulations,” quoting Hua Chunying, a foreign ministry spokesperson.

Japan was more specific, saying “The 25% across the board tariff on foreign steel is ill advised and naïve. Rather than saving American jobs it will destroy many tens of thousands of good, well-paying manufacturing jobs from steel consuming industries. It will inevitably invite retaliation from America’s most reliable allies, ultimately hurting American non-manufacturing industries as well.,” according to the Japan Steel Information Centre.

But the strongest criticism came from some of the U.S.’s closest allies.

CNBC quoted Canadian officials who pledged to respond to U.S. tariffs with their own measures. Canadian Trade Minister Francois-Phillippe Champagne called tariffs “unacceptable,” according to the news site, adding a pledge to defend Canadian workers in the steel and aluminum industry.

Chrystia Freeland, Canada’s minister of foreign affairs, is quoted as saying trade restrictions would hurt workers and manufacturers on both sides of the border. She raised a point that came up during the appraisal process by the Department of Commerce, saying it is inappropriate for the U.S. to view any trade with Canada as a national security threat. Both economically and politically, the two countries are such close allies it seems likely a carve-out may yet be made for the northern neighbor’s steel and aluminum industries.

As CNBC observes, Canada would be hit particularly hard by the tariffs. Between 2013 to 2016, Canada was the largest source of steel and aluminum imports to the U.S., with the trade critical to both countries. 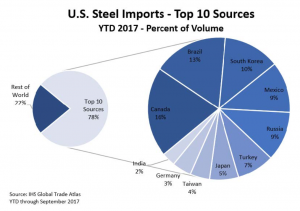 Meanwhile Europe has reacted with similar annoyance, feeling it has been caught up in a move against China, where the E.U. is as much a victim as the U.S. from emerging market dumping.

European Commission President Jean-Claude Juncker issued a strongly worded statement, saying the E.U. “will not sit idly” following the U.S. leader’s decision to slap tariffs on all imports. The E.U. had been hoping for a carve-out similar to that expected by Canada. CNBC quotes Juncker saying “we strongly regret this step, which appears to represent a blatant intervention to protect U.S. domestic industry and not to be based on any national security justification.”

Most countries say they will take cases to the World Trade Organization (WTO), but that has always proved to be a long, drawn out affair.

In the meantime, you can be sure there is intense diplomatic activity going on to make special cases of just about everyone.

The probability is this is far from the end of this story. There will likely be adjustments to the blanket position indicated as an opening gambit, so this is more like the beginning of a much longer  — and possibly increasingly acrimonious — process.