The Automotive MMI (Monthly Metals Index) stood pat this past month, holding at 100 for the second consecutive month. 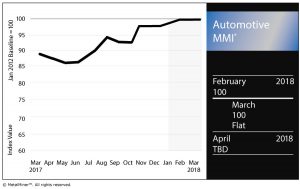 Within the basket of metals, U.S. HDG steel rose 5.8% on the month, while U.S. shredded scrap steel jumped 8.4%. Palladium continues to outpace platinum — atypical of the two metals’ historical relationship — and Chinese primary lead dropped 3.8%.
Section 232 buying strategies – grab your copy of MetalMiner’s Section 232 Investigation Impact Report for only $74.99!
Meanwhile, LME copper continued to cool off, dropping 3.5% month over month as of March 1.

President Donald Trump’s announcement Thursday that his administration plans to impose tariffs of 25% on steel imports and 10% on aluminum imports have sent shock waves throughout the world. Downstream producers, trading allies (like Canada and the European Union) and even U.S. politicians have expressed the hope that the president might reconsider. (For the MetalMiner team’s full analysis of the Section 232 announcement, visit our dedicated Section 232 Investigation Impact Report page).
Naturally, downstream producers, including major automakers, reliant on imports of steel and aluminum are apprehensive. In the marketplace, investors are apparently feeling the same way.
As CNBC reported, a number of automakers saw their stocks drop after Trump’s announcement (which has yet to be officially enacted as policy). GM closed 4% lower, while Ford and Toyota closed 3% lower apiece, according to the report.
The U.S. Motor and Equipment Manufacturers Association (MEMA) came out in strong opposition to the tariffs proposal.
“The tariffs announced today will be detrimental to the motor vehicle parts supplier industry and the 871,000 US jobs it directly creates,” said Steve Handschuh, MEMA president and CEO, in a prepared statement. “We have voiced repeatedly that while we support the administration’s focus on strong domestic steel and aluminum markets, tariffs limit access to necessary specialty products, raise the cost of motor vehicles to consumers, and impair the industry’s ability to compete in the global marketplace. This is not a step in the right direction.”
While those in the steel and aluminum industries have argued price increases that would arise as a result of the tariffs would not be severe, downstream producers, including automakers, have balked at that suggestion.
In another policy arena, the tariffs announcement also has an effect on the ongoing renegotiation talks focusing on the 24-year-old North American Free Trade Agreement (NAFTA). Throughout the proceedings, which began last August and have now gone through seven rounds, the U.S. has sought to win tighter rules on rules of origin for automotive materials, among other concessions.
Canada, the top exporter of steel and aluminum to the U.S., has expressed significant concern about the prospective tariffs. The Washington Post reported that Canada is “flabbergasted” at the tariffs proposal, according to Douglas Porter, the chief economist at the Bank of Montreal.
Wondering how your stainless steel prices compare to the market? Benchmark with MetalMiner