It’s that time — our latest Monthly Metals Index (MMI) report is in, covering the second month of 2018. 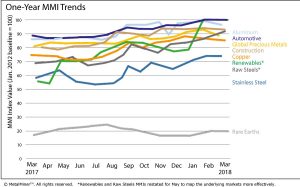 Momentum from the start of the year slowed considerably in this round of readings.
Need buying strategies for steel? Try two free months of MetalMiner’s Outlook
Four MMIs held at the same reading as the previous month (Automotive, Rare Earths, Renewables, Stainless) while four dropped (Aluminum, Copper, Global Precious, Construction).
The GOES and Raw Steels MMIs were the only ones to move up, with the latter rising 7% month over month for a March reading of 92.
On March 1, President Trump announced his administration’s intention to implement tariffs on steel and aluminum of 25% and 10%, respectively. That announcement became reality last week, when the tariffs were signed into policy (albeit with temporary exemptions for North America Free Trade Agreement partners Canada and Mexico).
Unsurprisingly, the tariffs have drawn criticism from trading partners around the world, including the European Union, Japan and South Korea, among others. The tariffs are officially set to go into effect March 23, but many countries are still lobbying for exemptions from the tariffs. In addition, the announcement drew criticism from downstream producers in the U.S. who rely on foreign sources of metal for their products.
A few other high points:

Benchmark your current cold rolled coil sheet prices and see how it compares to the market
You can read about all of the aforementioned — and much more — by downloading the March MMI report below.
[s3medialinksafe title=”Download the Report Here” file=”MMIReport_March2018.pdf” expireseconds=”300″ target=”_blank” /]