Home | Macroeconomics | Are Those SHFE Stocks Telling Us the Whole Story?
CommentaryMarket Analysis

Are Those SHFE Stocks Telling Us the Whole Story? 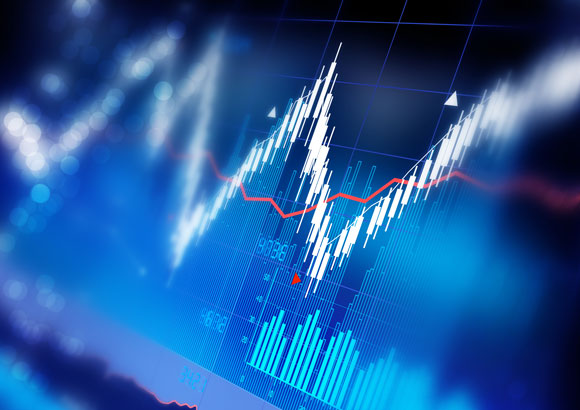 The state sector has benefited better than most in China from Beijing’s environmental crackdown, which resulted in enforced closure of steel, aluminium, coke, alumina and coal-burning power plants.

The extent to which the resulting rise in prices benefited domestic aluminum smelters was revealed last week when Aluminum Corporation of China Ltd (Chalco), filed its results for the year in Shanghai. Chalco, the listed arm of state-run aluminum producer Chinalco, made net income of 1.38 billion yuan ($218 million) last year, against a revised net profit of 368.4 million yuan in 2016, according to Reuters.

Revenue came in at 180.1 billion yuan, up from an adjusted 144.2 billion yuan a year earlier. Although Reuters did not quote any tonnage figures for the firm, it is safe to say Chalco didn’t produce less than the year before; the state firm was largely protected from the closures enforced on others.

But reports that despite closures in some quarters smelters were still producing near-record output is being taken by many as a reason why Shanghai Futures Exchange (SHFE) stock have been rising inexorably during the year; the reading is the market remains in significant surplus. 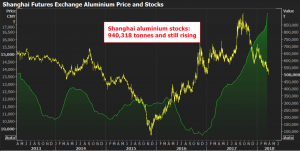 But Andy Home, writing in Reuters last week, suggests the rise in SHFE inventory may have more to do with tightening credit and the pull of high SHFE prices in Q3 sucking metal from trade inventory.

If that is the case, then we may have been reading a distorted view of the market.

The realization that the winter closure program was not having as significant an impact as had been expected led to a fall in prices during the fourth quarter, from a peak of RMB 17,165 per metric ton in September that has continued into this year to stand at below RMB 14,000 today.

Not surprisingly, Chalco’s numbers were weak for Q4. The already meager margin for last year of 0.77% was further diluted in Q4, and many smelters are said to be at breakeven or less this year.

That factor is probably the only thing keeping aluminum prices in China at current levels. If smelters were making money, the restarts now that the winter heating season is over would be stronger and the overhang of stock would be worse (a precursor of further falls). The market is expecting restarts to be muted, restrained by the unprofitable prices and Beijing’s new-for-old program restricting the addition of substantial new capacity on top of existing production.

With exports likely to be impacted by President Trump’s 10% import tax, prospects for excess metal to find its way into export markets in the form of semis are less positive. But, anyway, falls in the LME have meant Chinese semis exporters have less of an advantage than they had in Q4.

The next 4-6 weeks may indicate the trend for the rest of this year. In a normal market, if primary prices fall further, the domestic market would move toward a more balanced position as smelters are idled.

China, however, isn’t a normal market, and regional or state support could keep plants running.

Watch the domestic SHFE price via MetalMiner’s Indx. The trend this month has remained downward and inventory has continued to climb – whether it is new metal or repositioned metal previously in finance deals is not immediately clear to the market – they just see rising inventory and draw their own conclusions.

PREVIOUS POST:
This Morning in Metals: Aluminum, Steel Go at it in Drive for EV Market Share
NEXT POST:
Africa Bucks the Trend with New Continentwide Free Trade Agreement