The Automotive Monthly Metals Index (MMI) jumped three points for an April reading of 103 after a month that saw the U.S. impose Section 232 tariffs of 25% and 10% on steel and aluminum imports, respectively, in addition to escalating trade tensions between the U.S. and China. 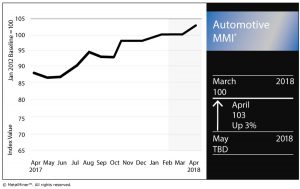 According to monthly sales data release by Autodata Corp, it was a strong month for several of the top automakers in the U.S. market.

General Motors posted a 15.7% increase in sales year over year, and is up 3.8% in the year to date compared with the same time frame last year.

Earlier this week, the Office of the United States Trade Representative released a list of 1,300 Chinese products that could be hit with tariffs (stemming from the administration’s Section 301 probe of Chinese trade practices).

Not long after, China announced it would place 25% tariffs on 106 U.S. products, including autos, Reuters reported.

It’s been a rough couple of weeks for Tesla.

In late March, the fatal crash of a Tesla Inc. Model X led to a massive selloff, leading to an 8.2% drop in its stock and its lowest closing in almost a year, CNBC reported.

On top of that, the electric vehicle (EV) maker continues to struggle with the cold, hard reality of production timelines. CNBC reported that Tesla missed its quarterly goal of producing 2,500 Model 3s per week.

According to Bloomberg, China accounted for 17% of Tesla’s 2017 revenue.