MetalMiner’s Global Precious Monthly Metals Index (MMI), tracking a basket of precious metals from across the globe, held steady for the June reading and remained at an index value of 88 for an unprecedented third straight month. 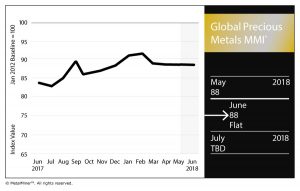 The dog days of summer have begun early, much as they did during the summer of 2017.

While this subindex fluctuated within a narrow band of only two index-value points between March and August 2017, there was a stretch of two months (May-June) when the Precious MMI sat at 84.

The U.S. gold price increase after June 1 last year had turned some heads. As my colleague (and, at the time, brand new) MetalMiner Editor Fouad Egbaria had reported, “the rise comes in a climate of political uncertainty, with an election in the United Kingdom, former FBI Director James Comey’s testimony before the Senate Intelligence Committee on Thursday and a European Central Bank meeting this week.” (That rise didn’t do much to spur the Precious MMI the following month — it dropped to 83 in July 2017.)

A year later, while we have no shortage of economic and political issues, gold has gone the opposite way, dropping below $1,300 per ounce to start the month for the first time since last December.

Meanwhile, the platinum-palladium price spread widened over the past month. The spread ($58 per ounce last month) widened to $77 per ounce for the U.S. bar prices of those respective metals. Palladium is on a record run of its own: it remains at a premium to platinum for the eighth straight month.

The U.S. silver price rose slightly for the June reading, yet the uptick couldn’t help break the subindex from achieving its first three-month trend of flatlining.

Employing an irresistible pun related to automotive-industry metals is always good for a chuckle. We’d imagine the analysts at Metals Focus would undoubtedly agree.

“Even with the lacklust[er] performance of both the Chinese and US auto markets, automotive palladium demand will almost certainly rise again this year, the result of growth in Europe and elsewhere, as well as tightening emissions legislation driving increases in PGM loadings,” analysts at the research group, following the release of a recent report, are quoted as saying by Reuters.

So, quite literally, cars are driving palladium (prices), at least in part.

Metals Focus analysts keep up the punny work when it comes to platinum as well:

“Global demand appears lacklust[er] and we have yet to see the full effects of the fallout from accelerating losses in the light-duty diesel sector,” they said, as quoted by Reuters. (Italics are ours.)

This commentary follows the PGM report released by Metals Focus, in which the group foresees a 1-million-ounce deficit due to increased auto demand and falling mine production, while platinum should continue its surplus.