Home | Precious Metals | Why Has Gold Not Lived Up to Its Status as a Safe Haven?
Market Analysis

Why Has Gold Not Lived Up to Its Status as a Safe Haven?

Stock markets in New York, London and Shanghai have been sliding for a month now since President Donald Trump unleashed a trade war on the U.S.’s trading partners in an effort to reset terms seen as unfair by Washington.

Normally, as stock markets slide and tensions rise, you would expect to see the gold price rise; the precious metal is considered a safe-haven asset because it retains or increases value during market turbulence.

Gold is often sought after by investors through economic uncertainty in order to limit their exposure to losses in other assets. Yet, currently gold is at or near a seven-month low, according to Reuters. According to the Singapore Business Times, for the first time in two years, Schroders has cut its global growth forecast for 2018 and 2019, citing rising oil prices and the uncertainty over trade relations that could drag on business decisions to hire and invest (particularly for exporters). 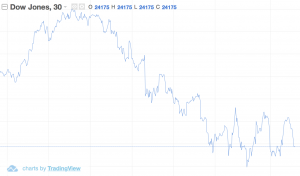 So, why isn’t gold playing ball?

The reason, according to the CME, is the dollar.

Rising U.S. Fed rates and rising real interest rates – up 20% from the start of the year as measured by 10-year bonds — are supporting the dollar. While the dollar remains strong, gold is being depressed.

To some effect, the metals markets are experiencing the same depressing impact on prices.

If sentiment were to change and, for example, growth were to slow in the U.S. in reaction to trade concerns, then gold could make headway. But while the dollar is king, gold will remain lackluster despite rising tensions.

The problem as Blu Putnam, chief economist at the CME Group, is quoted as saying is “… gold does not bear any interest, and the Federal Reserve is pushing short-term rates higher.”

Putnam added: “If core inflation was to move well above the Fed’s 2% target, the Fed would push rates even higher to stay abreast of rising inflation.”

In such an environment, holding gold is seen as a cost, not an opportunity. Although market turnover has been high, the bulls have not been in evidence and prices have remained depressed.