The Rare Earths Monthly Metals Index (MMI) stood pat this month, holding for a reading of 19. 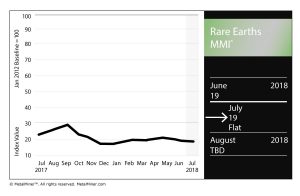 The Search for Rare Earths

As we noted in an MMI post earlier this year, the discovery of a large deposit of undersea rare earths approximately just over 1,000 miles off the shores of Japan generated much excitement in the world of rare earths. Rare earths are coveted for their application in a wide range of modern technology, ranging from cellphones to laptops.

China overwhelmingly dominates the rare earths market, so the discovery of a new major source of rare earths elsewhere could pose a challenge to China’s dominance — that is, if the discovered deposit were accessible.

The undersea cache of rare earths is not accessible via current extraction technology. As a result, companies like Toyota are teaming up with scientists in order to develop the extraction technology needed to get at those valuable materials deep under the sea, according to a report by the Nikkei Asian Review. Per the report, the amount of terbium in Japanese waters is equivalent to about 11,000 years’ worth of domestic consumption (significant amounts of yttrium and dysprosium were also detected).

According to the report, the University of Tokyo’s Rare-Earth Rich Mud Development Promoting Consortium is leading a project that aims to make the discovery a commercial reality. The group is leveraging the abilities of big companies like Toyota, Shin-Etsu Chemical and JGC, and Modec, according to the report.

Speaking of China’s dominance in the rare earths sphere, officials from Ucore Rare Metals, a Canadian rare earths firm, met with Trump administration officials in late June to discuss the U.S.’s dependence on China for the increasingly coveted metals.

According to a Ucore release, the company officials shared details on the company’s plans for a “domestic Strategic Metals Complex (SMC) in Southeast Alaska,” in addition to “the viability of development of domestic REE supplies in the Appalachian Coal District.”

“Near complete dependence on potentially unreliable foreign sources of rare earth materials remains a major national security vulnerability and one the Trump Administration is publicly committed to ending,” Ucore President and CEO Jim McKenzie said. “This vulnerability is also recognized in the U.S. Congress by the House of Representatives in its version of the 2019 National Defense Authorization Act (NDAA). As an example, Section 873 of the House NDAA prohibits the acquisition of sensitive materials, such as samarium-cobalt and neodymium-iron-boron magnets from non-allied foreign nations. If enacted into law, this requirement for a secure supply of rare earth magnets creates synergy with the forthcoming SMC construction by increasing demand for non-Chinese rare earth products.”

PREVIOUS POST:
Why Has Gold Not Lived Up to Its Status as a Safe Haven?
NEXT POST:
Copper MMI: LME Copper Prices Continue Downtrend