The spike in aluminum prices this quarter, caused by the initial announcement of sanctions on Oleg Deripaska and his investments, is an issue anyone in the aluminum sector will be only too well aware of.

Prices spiked in days and were associated with a number of other supply constraint worries. Sharp rises in conversion premiums have not relaxed even though the primary aluminum price has since eased back to where it was just before the announcement.

The price increase and supply-chain panic was a result of the sanctions announced by the Office for Foreign Assets Control (OFAC). Prices fell back as OFAC granted a stay of application until late October 2018, allowing consumers to adjust supply agreements accordingly. 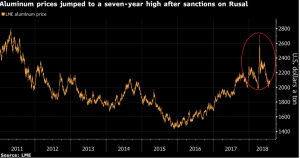 While the market is aware first-hand of the impact, what is only just becoming clear is the impact on the main supplier from Deripaska’s group: Rusal.

According to the Financial Times, drawing on the most recent Q2 company filing, inventories had risen to $2.88 billion at end the of June, from $2.41 billion in December as the company produced 939,000 metric tons of primary aluminum and alloys in the three months to June, but only sold 783,000 tons. Both first-half 2018 production and sales are down from a year earlier, largely due to the Q2 sanctions, even though the company continues to operate profitably.

Although Rusal is looking to boost output of value-added goods (VAGs), as they call processed products, they sharply cut back production of foil, powders and other VAG products in April for fear of not being able to shift production if sanctions were sustained.

As it happens, most global consumers restarted deliveries after a few weeks, but many in the U.S. are still reluctant to touch Rusal product – primary or VAGs – as the October crunch date looms. 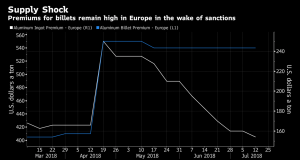 2019 annual contracts are usually negotiated in September, ahead of the October LME week, and in preparation for supplies starting in January of the following year. Unless there is certainty that the OFAC sanctions will be lifted or some form of exemption will be granted to Rusal despite what happens to Deripaska, Rusal will again face restricted sales options going forward.

The case against Deripaska is already severely impacting any trade with entities in which he or his holding company En+ Group have a stake, as banks carry out exhaustive checks on every payment, causing delays of weeks on some transactions.

Those consumers with other supply options will conclude it is just not worth the effort and switch to alternative sources, further crimping capacity availability in the market and pushing up conversion premiums even, if the primary metal price has yet to respond.