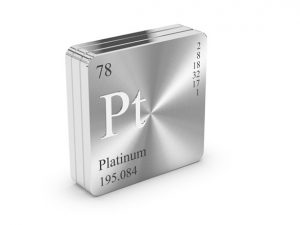 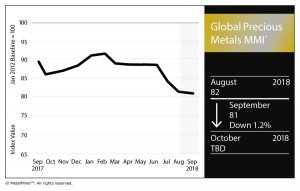 The former dropped below $800/ounce for bars, hitting $777/ounce to start the month. That ensured one of the largest chasms in the platinum-palladium price spread of late, as the U.S. palladium bar price surged back up to $979/ounce after two straight months of steady declines.

The gold price, meanwhile, also dropped to begin September, down to another historic low. Its bullion price in the U.S. slid under $1,200/ounce for the first time since January 2017, clocking in at $1,191/ounce.

Oversupply concerns have been a key driver of dropping platinum prices since the beginning of this year.

The World Platinum Investment Council (WPIC) foresees another year of oversupply, as indicated in its latest quarterly report, according to Reuters.

WPIC expects that 2018 will end with the global platinum market in a 295,000-ounce oversupply situation. Supply of and demand for the metal have fallen 2%, according to the group.

Investment demand continues to fall on the back of the aforementioned trends, but that looks to have reversed course. Ultimately, 2018’s investor demand for platinum should end up “only slightly lower,” Reuters quoted Trevor Raymond, WPIC’s director of research, as saying.

Gold Supply Market About to Get Big Infusion — Overnight?

In the Beta Hunt mine near Kalgoorlie, normally reserved for unearthing nickel, miners lucked out upon a couple large rocks containing about 4,000 ounces of gold, together worth upwards of $15 million.

To put that in perspective, usually mining operations uncover about 2 grams of gold per metric ton of rock mined. The lion’s share of the gold rocks’ composition was quartz.

Although it would be tempting to process the finds and unleash them unto the global precious metals markets, not so fast, says RNC Minerals Chief Executive Mark Selby. The specimens are actually worth more intact, according to the BBC radio segment aired on the story.

The largest rocks would go to auction as collector items, Selby said in the BBC report.