The Rare Earths Monthly Metals Index (MMI) stood pat this month for an MMI value of 17. 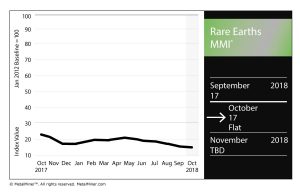 Tariffs have been flying left and right this year, impacting a wide range of products, from steel and aluminum to everyday consumer goods.

But one sector that has avoided tariffs is perhaps not so difficult to guess: rare earths.

Given China’s overwhelming dominance of the market and the U.S.’s position as a relative non-factor in the industry (the U.S.’s only rare earths mine closed in 2015), the U.S. is thus dependent on China for many critical rare earths.

A number of rare earths were on an initial list of products set to be targeted for $200 billion in tariffs, but those items were dropped from the final list, which went into effect late last month.

That dependence, paired with the rising trade tensions between the countries, has forced the U.S. to reconsider its sourcing of a number of critical materials, particularly from China, according to a Reuters report.

Per the report, the Pentagon has conducted a review that has identified hundreds of instances in which the U.S. military has depended on foreign sources for important materials.

According to the report, the findings of the Pentagon review are expected to be released in the coming weeks.

Malaysia to Look Into Radioactive Emissions at Lynas Corp Plant

According to the report, a politician who has been critical of the plant will head the committee that will conduct the review, a fact that has raised concern at Lynas.

PREVIOUS POST:
Not All Oil Shocks Are the Same
NEXT POST:
This Morning in Metals: U.S. Steel Pulls Back on Some Proposals in Contract Talks