Home | Commodities | Not All Oil Shocks Are the Same
Market Analysis

Not All Oil Shocks Are the Same

Drawing from an Economist article, there are at least two kinds of oil shock and they can have a distinctly different impact on the economics of the day.

Arguably, what we have seen this last 18 months represents the first kind oil shock. We have adjusted to price rises as the months have gone by, but we should not lose sight of the fact that prices have doubled in the last year and, at $85 per barrel, are three times above their low point in early 2016. 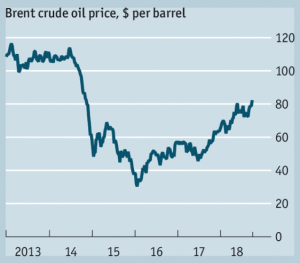 Robust global growth has boosted demand, while supply has gradually been constrained in a coordinated move orchestrated by OPEC and friends.

So far, such a rise has been accommodated by both mature and emerging markets, as strong exports have countered rising import costs, even for big oil importers like China and India. This is not as bad as the jump in oil prices we saw in the mid-2000s, the Economist notes, caused by surging demand, but it has to date been demand-led.

What we haven’t had is a supply shock — yet.

Prior to OPEC’s agreement last year, the world was awash with oil. It was being stored on tankers for want of buyers and the resulting collapse in price was reflected in a sharp contraction in drilling among not just shale frackers but also: deepwater offshore oil; new tar sands projects; and in the Arctic.

But OPEC’s endeavors bore fruit. The market was bought back into balance despite a recovery in North American tight oil production; many thought a ceiling around $50-60 per barrel would prevail.

What the market hadn’t allowed for was real-world supply disruption, as opposed to OPEC’s artificial cutbacks. The rise in prices has as much to do with perceived shortages going forward than actual tightness in supply now.

Venezuelan production has collapsed, Iran’s will be drastically reduced by the end of the year due to the reimposition of sanctions. OPEC has chosen not to open the spigots and questions have even been asked as to whether Saudi Arabia, traditionally the world’s swing producer, has the capacity to do so even if it wished.

Prices seem set to continue rising. Talk of $100 per barrel by the start of next year do not look overblown.

If economic growth is robust, most economies could weather a rise — but global growth is slowing.

As the Economist points out, when oil prices rise, oil-importing economies’ terms of trade deteriorate and the price of their imports rises relative to that of their exports. Because their exports pay for fewer imports, the importers’ current-account deficits widen.

Emerging markets are not alone in facing a double-whammy, though. Not only are current accounts deteriorating due to rising import costs, but rising Fed rates are pushing up the cost of overseas debt, just as many countries’ currencies weaken relative to the dollar pushing up costs of both debt financing and oil imports – both largely dollar-denominated – further.

Manufacturing export orders flipped from growth to contraction over the summer, the Economist states. As trade growth slows, the adjustment that oil importers must make to higher oil prices becomes more severe. As the Economist observes by way of example, India’s current-account deficit continues to swell, even as the rupee plumbs record lows against the dollar.

We may not be back to the days of over $120 per barrel, but even $100 could be just as damaging in a period of slowing growth.

At some point, our record bull market will turn, and a combination of rising oil prices and rising borrowing costs may ignite a fire in emerging markets that spreads to mature markets if both trends continue.