The Automotive Monthly Metals Index (MMI) fell 2.1% this month, down to an MMI reading of 94 for November. 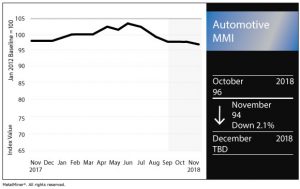 “Working with a leading tech partner like Baidu allows us to leverage new opportunities in China to offer innovative solutions that improve safety, convenience and the overall mobility experience,” said Sherif Marakby, president and CEO of Ford Autonomous Vehicles LLC, in a release. “This project marks a new milestone in the partnership between Ford and Baidu, and supports Ford’s vision to design smart vehicles that transform how we get around.”

Nissan’s October sales were down 10.6% in October year over year, with a 15.4% jump in INFINITI sales and a 13.0% drop in Nissan division sales.

Overall, auto sales in October were up 0.4% year over year, according to Automotive News.

GM’s sales were also down in China, where it sold 835,934 units, down 14.9% year over year. Chevrolet sales in China, however, were up 10% year over year, GM reported, “led by higher content crossovers including the Equinox, which saw 29 percent growth compared to a year ago.”

However’s GM’s Cadillac brand also performed well in China. Cadillac sales were up 4% year over year in the third quarter and are up 20% in the year to date.

In September, auto sales in China fell by the greatest amount in seven years, Reuters reported.

According to a phys.org report, an E.U.-funded project has developed an alternative heating system for electric vehicles (EVs) that would help reduce energy consumption and improve EV range.

“To warm up the cabin, energy must be extracted from the car’s batteries, which greatly affects the electric vehicle’s range,” Ute Maxi, coordinator for the E.U.-funded MAXITHERM project, was quoted as saying. “This limited range – especially in cold weather – is a significant roadblock to the mass uptake of electric vehicles in Europe.”