We should state from the outset that it’s not that energy costs are directly dependent on the oil price — very little electricity generation around the world, Saudi Arabia being an exception, is generated from crude oil.

But with power making up to a third of the electricity cost structure, energy costs in general are taken as either bearish or bullish for the light metal depending on whether they are falling or rising strongly.

So the oil price slide — prices have lost around a quarter of their value since early October — is one of a couple of early indicators that support for aluminum price rises is waning.

Indeed, the corresponding strength in the dollar this year, coupled with recent oil price weakness, goes a long way toward explaining the aluminum price slide since the summer. 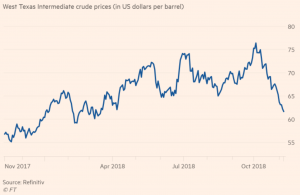 Back to oil, according to Reuters, front-month Brent crude oil futures were trading at $65.88 per barrel yesterday, while U.S. West Texas Intermediate (WTI) crude futures were at $55.96 per barrel, both down about 0.5% from their previous close.

The reason isn’t hard to find.

The U.S. is already the world’s largest producer by most measures, but Russia and Saudi Arabia — which alongside the U.S. are the world’s three largest producers — have also ramped up output this year in the belief they had achieved market balance following earlier cutbacks.

On the demand side, the Financial Times reports the Paris-based International Energy Agency in October cut its global forecast for this year and 2019, citing threats to economic growth. Rising supply meets slowing demand growth is a perennial problem for the oil price. Like many basic commodities with many suppliers, market discipline is hard to coordinate and even harder to enforce.

There had been a fear Iranian sanctions would hit global supplies, but exemptions granted by President Donald Trump to some major consumers of Iranian oil and increased output from big producers — such as Saudi Arabia, Russia and shale companies in the U.S. — has increased global output steadily, more than compensating for lost Iranian barrels.

Even the Saudi energy minister’s announcement that Saudi Aramco would supply 500,000 fewer barrels a day in December compared with November did little to raise the market for long. Traders absorbed the news and either disbelieved the cut would be extended through 2019 or would be sufficient to dent a potential surplus.

With Russia supplying some 10% of the world’s crude oil, sanctions threatened against Russian oil companies — or, at least, their owners — remain a potential threat. However, it is becoming increasingly clear Trump’s first priority is a low oil price and has shown with aluminum that he is willing to compromise on sanctions against oligarchs like Oleg Deripaska if it means commodity prices remain muted.