The Automotive Monthly Metals Index (MMI) picked up one point for a December MMI reading of 95. 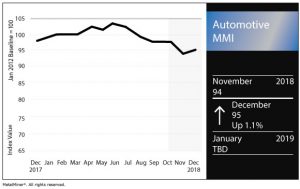 General Motors reports sales numbers on a quarterly basis, rather than a monthly basis. The automaker reported sales fell 11% year over year in the third quarter, but touted an average transaction price that was up $700 compared with the same period last year (up to a third-quarter record of $35,974).

As for November reports, Ford Motor Co. reported its U.S. sales dropped 6.9% year over year, with 196,303 units sold in the month. Even trucks and SUVs, which have become the automaker’s focal points amid the deemphasis on traditional sedans, saw sales drops (2.3% and 4.9%, respectively).

According to a sales forecast by Edmunds.com, total sales in the U.S. were projected to decrease 1.3% in November compared with November 2017, but up 1.3% compared with the previous month.

Among the bigger automotive developments last month came from GM, which announced the closure of several North American plants and a 15% workforce reduction.

“The actions we are taking today continue our transformation to be highly agile, resilient and profitable, while giving us the flexibility to invest in the future,” GM Chairman and CEO Mary Barra said in a prepared statement. “We recognize the need to stay in front of changing market conditions and customer preferences to position our company for long-term success.”

The move, which is projected to save the automaker approximately $6 billion, was unsurprisingly the source of sharp criticism from politicians, including President Donald Trump, who referred to the Commerce Department’s pending Section 232 probe of automobile imports in a tweet respond to the GM news.

“The reason that the small truck business in the U.S. is such a go to favorite is that, for many years, Tariffs of 25% have been put on small trucks coming into our country,” Trump tweeted Nov. 28. “It is called the “chicken tax.” If we did that with cars coming in, many more cars would be built here. and G.M. would not be closing their plants in Ohio, Michigan & Maryland. Get smart Congress. Also, the countries that send us cars have taken advantage of the U.S. for decades. The President has great power on this issue – Because of the G.M. event, it is being studied now!”

MetalMiner’s Stuart Burns touched on the announcement last week, noting the move might simply be a harbinger in the automotive sector at large.

“What is more surprising to some is that GM is acting when results are strong,” Burns wrote. “GM’s third-quarter adjusted earnings per share were 42% higher than the same period a year ago and its underlying earnings before interest and tax rose 25% to $3.2 billion. Net revenues rose 6.4% to $35.8 billion.

“But analysts see this as GM being a first mover and acting ahead of the curve.”

PREVIOUS POST:
Rio Tinto Makes First Bauxite Shipment From Amrun Mine
NEXT POST:
This Morning in Metals: Teck Resources Teams Up With Sumitomo on Chilean Mine Expansion