With all this talk of trade wars and weakness, both on the Shanghai stock market and in the Chinese currency, you would expect that steel production in China would be heading south fast.

In actual fact, steel mills continue to churn out product at near-record levels and imports of iron ore remain robust.

Platts reported this week that Brazil’s iron ore exports to China were up 2% in November to just under 20 million tons for the month and that China remains the destination for nearly 60% of Brazil’s total ore exports.

The futures market, however, is taking a dim view of the fortunes for steel products with Chinese steel futures dropping for three days in a row this week. Both Baoshan Iron & Steel Co Ltd and Wuhan Iron and Steel Co lowered their prices for January, despite forced output cuts as part of China’s winter-heating-season struggle to fight air pollution. Reuters reported that Tangshan ordered steel mills and other industrial plants to make further output cuts in December as part of a growing crackdown on air pollution.

The trade war does, however, appear at least to be having an impact on China’s steel exports.

China’s steel shipments dropped nearly 9% to 63.78 million tons in the January to November period, according to Reuters. All the more significant because during that period the currency has been steadily depreciating, a trend that would normally boost exports by making domestic producers more competitive in dollar terms.

The futures market probably has it right: weakening car sales and lackluster infrastructure investment combined with weak exports will gradually create a position of oversupply if, as expected, the crackdown on steel mill output during the winter season is not as robust as last year. 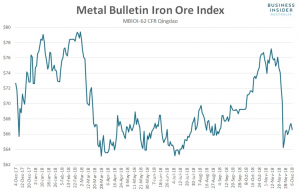