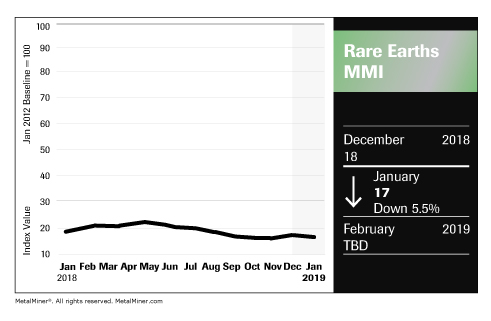 China is doubling down on illegal mining and traceability of rare earth metals and minerals, according to new guidelines published by the country’s Ministry of Industry and Information Technology (MIIT) late last week, as reported by Reuters.

As readers know, China’s been attempting to clean up its rare earths production sector for about a decade already, and it’s made strides toward its goals, but there’s still a way to go.

Even after launching a crackdown on the rare earths sector in 2009 and being forced by the WTO to get rid of export controls in 2014, “illegal mining and production continued to disrupt ‘market order’ and damage the interests of legitimate enterprises,” the ministry stated in their notice, according to Reuters.

The ministry is also committed to establishing a traceability system to prevent buyers from snapping up illegal material and will suspend licenses of companies that break the law, according to the news service.

Across the Yellow Sea, patent applications for uses of rare earths have been going strong.

According to the Korean Intellectual Property Office (KIPO) on Dec. 30, as reported by BusinessKorea, “the number of patent applications related to the use of rare earth materials for permanent magnets and batteries totaled 2,356 over the past five years from 2011 to 2016.”

High-tech heavyweights Samsung led the way, with Hyundai and LG not far behind.