China is one of the most-watched economies in the world because its health ties in heavily with overall global economic growth. Further, there is a strong correlation between the Chinese economy as an industrial metals demand generator and the primary metals market outlook.

MetalMiner has always followed some Chinese indicators in order to completely understand and correlate metals markets. Let’s take a look at some indicators buying organizations may want to consider.

The International Monetary Fund (IMF) recently lowered its 2019 annual average global growth projection down to 3.5% from 3.7% on the heels of China’s growth slowdown: why?

The most recent downward trend emerged with the United States tariff changes in early 2018; however, the Chinese Caixin PMI is still trending higher than it did in 2017.

While Chinese manufacturers’ confidence appears lower overall as measured by the PMI, the bigger picture of Chinese economic confidence is more nuanced.

The Manufacturing PMI showed weaker sentiment when compared to other major sectors of the Chinese economy, while the Industrial Production and Mining Indexes showed improved confidence over the prior reporting period. In terms of the automotive industry, car production figures dropped while total vehicle sales and car registrations went up in absolute numbers.

Honson To, chairman of KPMG in the Asia-Pacific region and China, also finds reason to remain optimistic over China’s growth prospects this year, namely in the areas of domestic infrastructure projects and high-tech manufacturing. He expects infrastructure investments to contribute to continued Chinese growth, especially in the areas of high-speed railways and roads. Additionally, he projects further growth in the advanced manufacturing sector during 2019.

Beyond the direct stimulus impact, these upgrades to infrastructure will benefit the country by strengthening regional transportation across the vast country. While China boasts the world’s largest population, in terms of density it is much further down the list; therefore, improved regional infrastructure should provide a domestic stimulus for the Chinese national economy.

On the other hand, there will likely be a lag by up to a year in terms of how these domestic infrastructure projects will impact growth numbers, given the nature of such projects, as pointed out by Alistair Ramsay, a research manager with Fastmarkets, during a Jan. 25 BrightTalk presentation on the steel sector in China entitled “Ferrous Metal, Full Steam Ahead?”

A look at the Shanghai Composite Stock Market Index shows a trend toward declining stock prices throughout 2018.

Additionally, a recent Goldman Sachs analysis of 20 well-traded stocks shows more weakness than expected coming from the domestic side of the Chinese economy, stating that the slowdown is visible in the data from the 20 stocks selected for the analysis.

Weakened performance in the consumer and producer markets has led to much speculation that the domestic slowdown has hit to a greater extent than expected.

Domestic pessimism over the Chinese economy’s health due to the U.S.’s aggressive tariff policies is viewed as the key issue, as tariffs are effectively curbing exports and slowing overall growth.

As a factor potentially in support of China’s growth in the sectors identified by Honson, foreign direct investment (FDI) throughout the first half of 2018 (the latest dates for which figures are available) remained stable against a backdrop of falling FDI worldwide across both developed and developing countries.

According to the latest figures from the Chinese Ministry of Commerce, “FDI went up 3 percent year-on-year to $135 billion in 2018, while that of the world’s total and developed countries slumped 41 percent and 69 percent, respectively, in the first half of 2018.”

The strength of FDI in China is only second to the United States, according to another recent analysis. It should be noted that these figures, like those of the Chinese government, do not reflect the latter months of 2018 and are based on a 10-year analysis.

Others are more critical of the FDI situation in China, pointing out that even Chinese investors may prefer to invest elsewhere given a restrictive domestic investment environment resulting from recent Chinese government policies.

The Yuan Regained Weakness Against the Dollar in 2018 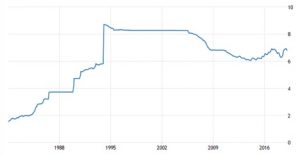 Figure 5. Long-term Comparison of the USDCNY – Index of the U.S. Dollar Against the Chinese Yuan
Source: https://tradingeconomics.com/china/currency

Chinese policymakers are well-known for their currency price control.

Once the yuan was devalued in 1994, the currency stayed under very tight government control, with very little change against the dollar for many years.

Quantitative easing is a popular technique; the Chinese government is well-known for injecting liquidity in the banking system to control the value of the currency. 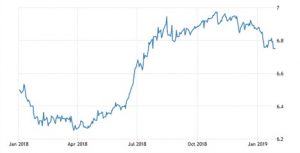 Figure 6. The Appreciation of the Yuan Against the Dollar As a Result of Trade Policies During 2018 Quickly Reversed

The long-term effect of China’s intensive depreciation policy is to make steel and aluminum products cheaper.

Even in the current trade environment with applicable tariffs, steel and aluminum are still cheaper when compared with buying them in the U.S. due to the currency exchange rate between the U.S. and China. This situation is more or less continuing in an unmitigated fashion, as the Chinese government continues to exert artificial controls on the exchange rate.

So What Does That Mean for Metals?

If it’s not a stock market boom year, we might expect the metals market to continue to trend sideways, if not head upwards.

However, if the dollar stays strong, that should offset some of the gain — metals may see lower prices and then still fall in line with the sideways trend. This question is still undecided and is wrapped into the story of trade between the U.S. and China.