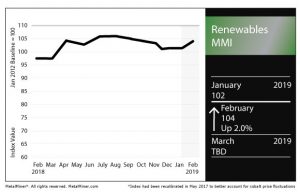 According to a Bloomberg report, miner Glencore plans to cut its workforce at its Mutanda copper and cobalt mine in the Democratic Republic of the Congo (DRC).
According to the report, the miner is looking to invest in technology for cobalt extraction from sulfide deposits rather than from the oxide ore found at the Mutanda mine.
Nonetheless, it’s been a rocky year for cobalt miners in the DRC, as the government revised its mining code to nearly triple the royalties miners must pay on cobalt. In addition, the country held a presidential election in December that resulted in a victory for Felix Tshisekedi; however, the results of the election remain disputed as the country looks to move on with a successor to Joseph Kabila, who stayed on as president two years past the end of his mandate.
Political instability in the DRC would contribute to rising prices for cobalt and make the price of doing business much higher for miners like Glencore; political developments in the DRC should be monitored by cobalt watchers (not to mention copper and coltan).

[Editor’s note: The GOES MMI, covering grain-oriented electrical steel, will no longer be featured in a separate post; instead, GOES commentary will henceforth appear within the Renewables MMI.] 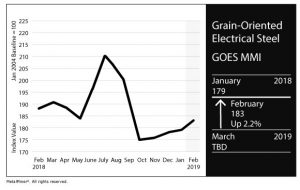 The proposed joint venture between German firm ThyssenKrupp and India’s Tata Steel — in which the two firms would merge their European operations — has reached the stage of review by the European Commission’s competition authorities.
Back in October, the European Commission released a statement on the proposed merger, explaining that its “initial market investigation raised several issues relating in particular to combining both companies’ offer of certain specialty flat carbon steel and electrical steel products.”
“Steel is a crucial input for many of the goods we use in our everyday life, and competitive steel prices are vital for the European economy,” said Margrethe Vestager, commissioner in charge of competition policy. “Industries dependent on steel employ over 30 million people in Europe and we must be able to compete in global markets. This is why we will carefully investigate the impact of the planned combination of Tata Steel’s and ThyssenKrupp’s steel businesses on effective competition in the steel markets.”
According to a Reuters report, ThyssenKrupp CEO Guido Kerkhoff said the company has had constructive talks with the European’s European Commission on the proposed joint venture.
GOES is used in transformers and large generators.