Copper MMI: After a Seven-Week Rally, Copper Prices May Have Lost Steam

The Copper Monthly Metals Index (MMI) increased by 3.9% this month, reaching an MMI value of 79.

With a seven-week sustained increase in prices, the rally may be over for the metal.

Trading volume dropped off in late February and the price moved sideways once again in early March. 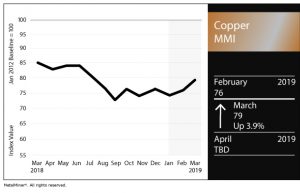 With week-on-week price gains for seven straight weeks, LME copper prices reached a high of around $6,500/mt before retreating back to $6,477/mt in early March trading, finally exceeding the $6,380/mt price point around which it oscillated since July.

From a longer-term perspective, LME copper prices remain within their historical trading range. 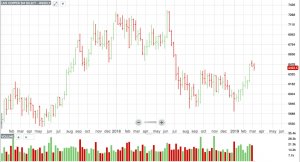 We can see that a previous eight-week rally preceded a longer-term sustained price uptrend during 2017. On this basis, perhaps we could see more pricing upside, but the rally appears to have softened as of press time, turning around at $6,500/mt. The price has no soared quite as high as it did previously.

Here is a one-year analysis of LME copper trading volume and open interest: 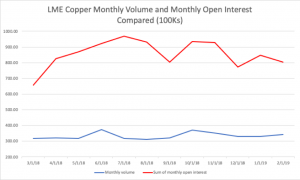 Based on current mixed signals, as monthly open interest dropped in February and monthly volume only edged up very slightly, there may not be as much upward momentum as might otherwise be expected for copper prices. 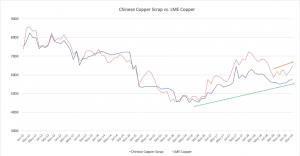 LME warehouse stocks trended downward throughout the year, supportive of higher copper prices. According to Reuters, LME-registered warehouse stocks fell to 21,600 tons and remain at their lowest point since 2005. However, some of this decline may be attributable to new LME warehouse rules that make it more difficult to generate a return; therefore, excess available stocks might not get deposited into LME warehouses.

Additionally, stocks of the metal in SHFE warehouses hit 227,049 tons in late February, following cyclical restocking at the start of the year, which more than doubled the volume available following a recent low of around 100,000 tons in late 2018.

According to the International Copper Study Group (ICSG), refined copper production has fallen short of demand for multiple years now. Supply shortages are bullish for prices, which may have also pushed LME copper prices higher in early 2019.

On the other hand, lower trading volumes signal bearishness. It’s possible that significant LME shadow stocks, buoyant Chinese supplies of the metal and weak domestic demand in that country may act as price moderators, keeping prices in check.

In February, like January, the Copper MMI basket increased, with the sole exception of Korean copper strip, which fell by 3%.

India’s copper cash price saw the biggest gain at 6.5%, closely followed by Japan’s primary cash price, which increased 6%. Most of the remaining metals in the basket increased in the 4-5% range, with the exception of China’s copper #2 scrap price, which was up 0.47%.