The U.S. Census Bureau and Department of Housing and Urban Development on Tuesday released data on February housing construction, revealing the month was a particularly slow one for new construction.

In addition, single‐family housing starts in February hit 805,000, down 17.0% from the revised January figure of 970,000. The February rate for units in buildings with five units or more was 352,000, according to the report.

Housing starts had been trending steadily upward in recent years until a downtick throughout much of 2018. 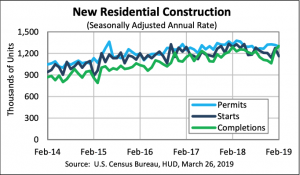 With recession fears popping up around the world, it remains to be seen if the recent data constitutes a short-term blip or a harbinger of some kind of sustained economic downturn. In 2018, housing starts jumped from 1.29 million in February to 1.33 million in March.

So far this year, both January and February housing starts were down on a year-over-year basis.

The next housing starts data release from the Census Bureau and HUD is scheduled for April 19.