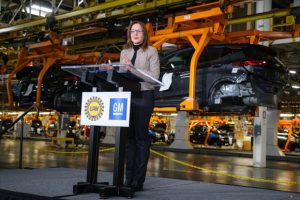 General Motors last week announced it is planning to invest $300 million at a southeast Michigan assembly plant that will produce a new Chevrolet electric vehicle (EV).

“We are excited to bring these jobs and this investment to the U.S.,” GM Chairman and CEO Mary Barra during an announcement at the plant, according to a GM press release. “This new Chevrolet electric vehicle is another positive step toward our commitment to an all-electric future. GM will continue to invest in our U.S. operations where we see opportunities for growth.”

The investment is aimed at the automaker’s plant in Orion Township, Michigan, and will create an estimated 400 jobs, the company says.

The automaker already produces the Chevrolet Bolt EV at the Orion Township assembly plant, but it plans on producing a new Chevrolet EV at the same plant.

“The new Chevrolet electric vehicle is in addition to the existing Chevrolet Bolt EV, further advancing GM’s commitment to an all-electric future,” the GM release stated. “It will be designed and engineered off an advanced version of the current award-winning Bolt EV architecture. Additional product information and timing for the new Chevrolet EV will be released closer to production.”

According to the release, GM chose the Orion Township plant for production of the new EV for, among other factors, the fact that the new EV will be based on the same vehicle architecture as the Bolt and that manufacturing the new EV at a U.S. plant “supports the rules of origin provisions in the proposed United States, Mexico and Canada Agreement.” (The United States-Mexico-Canada Agreement, signed late last year during the G20 Summit by President Donald Trump, Canadian Prime Minister Justin Trudeau and then-Mexican President Enrique Peña Nieto, still must be ratified by the three countries’ legislatures.)

The automaker has come in for several rounds of criticism from President Donald Trump after it announced in November 2018 that it would idle five North American plants, including the Detroit-Hamtramck Assembly plant and the Lordstown Assembly plant in Warren, Ohio.

Just last week, Trump took to Twitter to criticize the automaker for its idling of the Ohio assembly plant.

On March 17, Trump tweeted: “Just spoke to Mary Barra, CEO of General Motors about the Lordstown Ohio plant. I am not happy that it is closed when everything else in our Country is BOOMING. I asked her to sell it or do something quickly. She blamed the UAW Union — I don’t care, I just want it open!”