This morning in metals news, the copper price fell again, stocks picked up Thursday as U.S.-China trade talks continued and shares of Reliance Steel are up 31% this year.

Has Copper Hit a Wall?

The London copper price had been enjoying an upward trajectory from the start of the year through most of February, but that trend seems to have run out of steam. 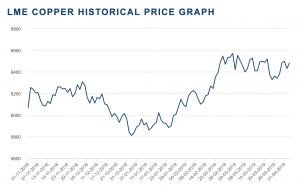 Since late February, the metal has been trading mostly sideways, but on Thursday’s session fell again on weak German manufacturing data, Reuters reported.

In addition, the situation at the Las Bambas copper mine in Peru escalated, as a judge ordered jail time for lawyers who represented indigenous villagers who blockaded the mine in protest, according to the Reuters report.

Stocks Up on U.S.-China Talks

The ongoing trade talks between the U.S. and China continued this week in Washington following last week’s sessions in Beijing; once again, markets are showing great sensitivity to any semblance of good (or bad) news out of the negotiations.

Reliance Steel Shares on the Rise

Metals service center operator Reliance Steel has seen its shares surge 31% in the year to date, according to Zacks Equity Research.

According to the Zacks analysis, the company has benefited from its focus on high-margin products, and has seen strong demand in the aerospace and automotive markets.

PREVIOUS POST:
India’s Reliance on Coal Draws Criticism from Greenpeace, Other Agencies
NEXT POST:
China’s Renminbi is Unlikely to Threaten the Dollar — For Now